The opportunity of inflicting a heavy defeat may have diminished with a batting collapse in the final session of the second day s play at Mohali, but the Indian cricket team has managed to keep their noses ahead.

The opportunity of inflicting a heavy defeat may have diminished with a batting collapse in the final session of the second day s play at Mohali, but the Indian cricket team has managed to keep their noses ahead of England in the third Test. Trailing by 12 runs, India will resume their first innings at 271 for 6, with Ravichandran Ashwin and Ravindra Jadeja at the crease. The two batsmen helped India recover from a batting collapse, as their 67-run unbeaten stand for the seventh wicket not only kept England at bay but also took the Indian total near to that of their opponents. LIVE Cricket Scorecard: India vs England 3rd Test at Mohali

Ashwin slammed the ninth half-century of his Test career, and reached 57 not out while Jadeja looked well-set for another fifty, reaching 31 not out when stumps were drawn on the third day. The two Indian all-rounders rescued India from a precarious position, and if they continue to bat well in the first session on the third day, the hosts will be back in command of the Mohali Test. On the other hand, England, who were bowled out for mere 283 in their first essay, will not want India to bat for long, as even a slender lead will help the hosts regain the lost ground. ALSO READ: India vs England 3rd Test Day 2: Hosts’ collapse, Ashwin-Jadeja fightback and other highlights

India were going pretty till the tea break on Day Two, reaching 148 for 2. But a splendid effort by Chris Woakes at deep midwicket to remove Cheteshwar Pujara (51) sparked a batting collapse. Ajinkya Rahane was dismissed for fifth-ball duck, and a miscalculated run resulted in debutant Karun Nair being dismissed for mere 4 runs.

India s problems compounded when after a brief stand, Virat Kohli too walked back to the pavilion edging one behind to the wicketkeeper off Ben Stokes. Kohli scored 62 off 127 balls, and till the time he was there at the crease, India s chances of taking a big lead in the first innings were still alive. ALSO READ: Ashwin s fifty, Nair s run out on debut & other stats highlights from Day 2 of IND-ENG 3rd Test

Going into the third day, India will want to bat long and get as many runs as possible. There is still some batting left in the Indian ranks with the likes of Jayant Yadav and Mohammed Shami to come. Ashwin and Jadeja have looked strong in the middle, which means England will have to work really hard to get the remaining Indian wickets and come on to bat again. If India manage to take a lead of say even a hundred runs, it will be an interesting game as England will then have to bat well.

From the English perspective, it was a good final session wherein they got plenty of wickets to prevent India from putting up a strong batting show. The flurry of wickets meant India are not likely to take a massive lead in the first innings, which keeps England in the game despite having batted and bowled poorly in the Test so far. Pujara s poor shot, Rahane s horrible run and a direct hit from Jos Buttler was all that was needed for England to make a comeback of sorts in the game.

However, England will have to work harder than India to win this Test. They are already trailing 0-1 in the thirdTest and would not want to leave things to be settled at the end. England will have to ensure that they fold up India s tail soon, and set a target of at least 300-350 runs for the hosts. The pitch is also expected to crumble at some point of time, which means England can fancy their chances if they bat well in their second innings. 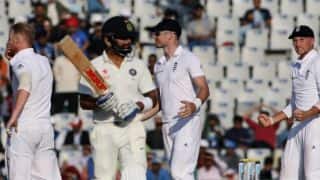