Pandya was at the forefront of India s demolition job with five wickets in 29 balls, his best returns as a Test allrounder, on a day on which 16 wickets fell.

After his best day as a Test bowler, Hardik Pandya was pleased to have contributed to India s position after two days at Trent Bridge, which sees them lead England by 292 runs.

Pandya was at the forefront of India s demolition job with five wickets in 29 balls, his best returns as a Test allrounder, on a day on which 16 wickets fell. From 46 without loss going into lunch on Sunday, England lost all ten wickets in the afternoon session. By stumps, India s lead had swelled to 292 and Pandya, the bowling hero of the day, was chuffed with his performance and the team s position.

Quite happy with the five-for, said Pandya after stumps on Sunday. We’re happy with the lead too, really happy for the team as the batsmen applied themselves and got us a decent lead. I remember as a bowling unit during lunch, we got together and focused on the right areas. The ball was swinging in the morning but didn’t get wickets, so Ishant [Sharma] and I tried to stifle the runs and see what happens because we didn’t get wickets in the morning.

Pandya s spell of 5/28 in six overs began with the wicket of England captain Joe Root first ball, which left the home side at 86/4. That would become 108/5 when Mohammed Shami removed Ben Stokes, and then Pandya grabbed four more wickets.

I was happy to get a wicket on the first ball, particularly Root. Generally I try to seam it as well, but when you’re trying to swing it, you tend to bowl full and drivable balls. I’m not scared of being driven, because if the wickets come, runs don’t matter, said Pandya. I like to use the crease while bowling. If I keep bowling the same way, they’ll get used to it. If I go wider, batsman thinks it is coming in, but it might go away and produce a wicket-ball.

Pandya, 24, has found himself at the end of some criticism during this series. West Indian legend Michael Holding questioned Pandya s all-round skills in the aftermath of India s innings defeat at Lord s, while former India offspinner Harbhajan Singh was more critical, stating that the Pandya needed to be disassociated with as an allrounder. Former India batsman VVS Laxman felt that Pandya should have been dropped for the second Test, and Greg Chappell termed Pandya a work in progress.

Asked by former England captain Nasser Hussain what he had to say about such criticism, Pandya smiled wryly and said: Let’s not worry about me, I know what I’m doing, and I don’t care what people say. The team backs me and that’s important. 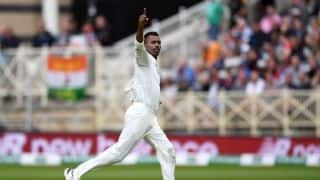 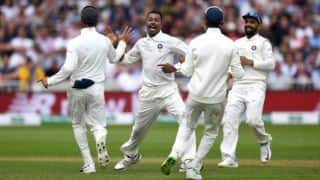