Virat Kohli and Cheteshwar Pujara, who made 72 off 208 balls, frustrated England with a partnership worth 113 in 50 overs.

India were in no hurry to declare on day three at Trent Bridge, as they rightfully could be with two days left in the Test and a good forecast for Tuesday. The pitch has shown ample signs of uneven bounce across the third day s play, and in batting out two sessions for the loss of just one wicket to reach tea on 270/3, India, with a lead of 438, are on course to smash England.

Virat Kohli, who on 63 became the sixth Indian to score 400 runs in a Test series on English soil, is seven runs shy of an inevitable century after putting together 113 in 50 overs with Cheteshwar Pujara who made 72 off 208 balls.

It was not pretty, but Pujara s first Test fifty in 16 innings was vital because it helped keep England wicketless for a session and a half, in the process taking India s lead to nearly 400. It would have also instilled in him the belief that runs can be ground out in tough conditions, which he has struggled to do on tour and against the red ball all summer.

Getting dropped on 40 by Jos Buttler at second slip was a big slice of luck for Pujara, and he used it to add 32 runs to his score in the company of Kohli, who today became the leading run-getter in Tests this year. He was not as fluent as he had been on Sunday evening, and as England s fast men probed away on an inconsistent surface, Pujara got bogged down. The drives and clips dried up, the uneasiness outside off stump resurfaced. But he rode the awkward bounce to bat out time, and despite the outer and inside edges Pujara was able to make an impact.

The introduction of spin opened up a few eye-catching strokes, and with it visions of India batting unscathed into the tea interval, but on 72 Pujara feathered an edge off Stokes to first slip. The bowler deserved that wicket for how well he did all day, never lagging in energy and getting the ball to wobble off the seam. If Stokes, like all of England s fast bowlers today, was guilty of anything it was not using the short ball often.

Kohli, equally, was not his elegant self but like Pujara, that adhesiveness kept England frustrated. This wasn t a track on which he could plant that front foot forward and drive, and with Stokes and Stuart Broad cannily pitching the ball in awkward spots, Kohli had to be wary.

The edginess crept in on occasion, such as when he flashed his bat at Adil Rashid as the rain grew heavier with India s lead just past 400.

The new ball brought about a few more testing moments, with Kohli inside-edging onto his pads and Broad rapping Ajinkya Rahane on the gloves. Kohli spent 31 balls in the eighties before an authoritative whip off Anderson for four took him to 93, and he will resume batting after tea with the intent to correct what he failed to do on Saturday – score his 23rd Test century in his 118th innings.

In the session in which England needed to run through India to prevent their target reaching gigantic proportions, they were left wicketless. The sky was the clearest it had been in three mornings, the pitch started to agitate and this meant that neither Kohli or Pujara was able to dominate, but that would not have been a concern because it kept England in the field for two hours.

With inconsistent bounce starting to appear early in the session, the situation was not one in which India s batsmen could dominate. Kohli and Pujara struggled for fluency, with 23 runs coming from the first hour during which the bowling was rhythmic and constrictive. In the second over, Kohli clipped Chris Woakes for a boundary, but when he tried it again a leading edge flew wide of gully for four. Woakes followed by beating the bat, then had the batsman jamming his bat down on one that kept low.

James Anderson should have earned a wicket in a fine spell of 10-4-10-0 when on 40, Pujara edged to Buttler at second slip who made a mess of the catch. Off the final ball of Anderson s spell, a sharply moving delivery stayed low and struck Jonny Bairstow on his left hand to force him off the field. The ECB tweeted soon after that Bairstow had been sent to a local hospital for an x-ray on his left middle finger, which in due course revealed a fracture.

Around the time that Pujara and Kohli reached their fifties, England complained about the condition of the ball, which compelled the umpires to inspect it. It was deemed to be fine, which added to the image of England being utterly frustrated by India s second wicketless session of the Test. 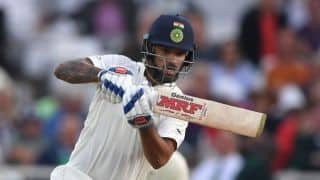 India vs England, 3rd Test: Shikhar Dhawan first Indian opener since 1952 to be out stumped in England