Clearly frustrated, India used both reviews in the last 30 minutes of the session, each for lbw shouts against Stokes and Buttler, but to no avail.

England’s fifth-wicket pair of Jos Buttler, batting ahead of the injured Jonny Bairstow, and Ben Stokes held India at bay for the entire second session on day four at Trent Bridge. At 173/4 at tea, England are still 348 runs shy of their target but that is not their prerogative.

With Ishant Sharma bowling himself into good rhythm, claiming the England openers in two overs when play began, it was tough going for the batsmen in the morning, but Buttler – dropped on one by Rishabh Pant – and Stokes (42* off 111 balls) performed admirably to deny India a wicket during the afternoon.

Ishant caused problems to Stokes with his bounce from around the stumps, while Jasprit Bumrah s outswingers posed plenty of questions of Buttler, who edged him several times during his unbeaten 67 off 115 deliveries. Stokes was initially subdued, displaying the tenacity of a man forced to bat out sessions. His first 37 balls yielded three runs. R Ashwin, who appeared stiff during his first three overs, was defended with exaggerated defence. Each time a delivery rolled to the legside, Stokes stuck out a hand to reject Buttler s movements toward taking a single.

Ishant, with the threat of his around-the-stumps angle, was played with a full face of the bat ball after ball. When Ishant veered too fine, Stokes brought out the whip shot to collect his first boundary off his 48th ball faced. A second followed in the over, when Ishant over-pitched and was elegantly driven back past the stumps. This moved Kohli to insert a silly mid-on, which meant Stokes had to shun any such extravagance.

Hardik Pandya sent down four tidy overs for seven runs, bowling nine dots to Stokes and eight to Buttler. When Ashwin returned, three fours came off three overs as Stokes and Buttler opened their arms. Now well embedded, Stokes then took the liberty of slashing Bumrah past point. Then Buttler brought up his third fifty in eight innings since making a comeback to the Test team in June with a lovely drive for four off Bumrah.

Clearly frustrated by this obstinance, India used both reviews in the last 30 minutes of the session, each for lbw shouts against Stokes and Buttler, but to no avail. The pair played out a testing little burst from Mohammed Shami, getting the ball to reverse, to give India some encouragement.

India had been expected to dominate the day when England started on 23 without loss and that it precisely how it transpired. It took Ishant five balls to extract Keaton Jennings, who was forced to play at a good delivery that he edged to Rishabh Pant. Six deliveries later, Ishant got a climbing delivery to straighten for Alastair Cook to poke a regulation catch to KL Rahul at second slip.

Root was given a torrid examination, beaten by Bumrah s sharp inwards movement thrice in one over. The uneasiness remained, as he continued to push outside off stump and saw one mistimed whip off a Bumrah full toss fall short of mid-on. Bumrah had his man in the next over when Root pushed hard and off the back foot and nicked to Rahul at second slip, who held a very sharp catch for his fifth of the Test.

Moments later, it was Kohli who held an even better one at third slip when Ollie Pope threw his bat at a wide ball from Shami. England had fallen to 62/4. A fifth wicket presented itself when Buttler nicked Bumrah, but Pant was fractionally late to react because he had initially moved the other way. 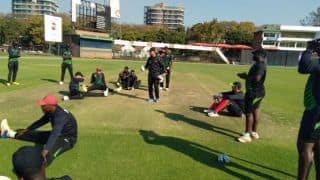