The pitch eased out, the balls started doing less after the 40-over mark and Kohli, off 74 balls, and Rahane, off 76, raised their half-centuries.

India s highest partnership in five innings, between Virat Kohli and Ajinkya Rahane, and their first wicketless session of the series has given them control of the Trent Bridge Test, following a collapse of three wickets for 22 runs in the minutes leading upto lunch. The first batting pair to stand up after the abject failure at Lord s, the latest opening act of Shikhar Dhawan and KL Rahul had done well to add 60 before Chris Woakes grabbed three wickets in a testing spell, but the durability of Kohli and Rahane took India to 189/3 at tea.

Kohli had survived a testing few moments before lunch, which was taken when Cheteshwar Pujara hooked Woakes to long leg to give the England pacer his third wicket, but as the sun crept out in the afternoon he morphed into the Kohli of Edgbaston.

He and Rahane scored at a healthy clip, courtesy a blend of fluent and fortuitous boundaries, and saw out the first hour after lunch without further loss. Kohli was assured as the afternoon session began, barring one very confident lbw from Woakes, who he then drove languidly past the covers for four. A filthy full toss from Ben Stokes was duly twirled away for four four past midwicket, further underlining the growing feeling that dropping the left-arm seamer Sam Curran was a big mistake by England.

The arrival of Adil Rashid saw Kohli move past Rahane, with an easy-as-they-come short ball whipped to midwicket and a loopy wide ball smashed to the deep extra cover boundary. A third boundary off Rashid gave the legspinner figures of 0 for 15 in two overs.

Rahane had several heart-in-mouth moments, twice against Stokes when he stabbed in the air between cover and point and edged wide of third slip and off Woakes when a leading edge flew past gully. Fruitfully, each of these loose strokes resulted in boundaries. As the runs came, Rahane s half-heartedness dissipated.

The pitch eased out, the balls started doing less after the 40-over mark and Kohli, off 74 balls, and Rahane, off 76, raised their half-centuries. Just before lunch, Joe Root moved third man fine and put back a long leg, and Stokes bowled a series of short balls to try and test Kohli s back and tempt him into indiscretion. Barring one needless poke, India s captain held fort. A wide from Stokes raised the 100-run stand.

That it came after a 60-run opening stand between Dhawan and Rahul was indication of how runs are there to be made on this surface, and raises the question as to why Joe Root chose to field. The key for India was that Dhawan and Rahul survived the testing deliveries, and that there was no left-armer in Sam Curran. This frustrated Broad and Anderson, who did not bowl full enough to elicit the false shots. They came close, but with luck on Dhawan and Rahul s side, India made gains and the result was their highest opening partnership outside Asia and the West Indies since December 2013.

Against Anderson, Dhawan was beaten but also clipped boundaries off the pads and over the slips. Rahul did not get such liberties from Anderson, who in one over beat him with two different deliveries, one that deliciously moved away and the other that sat up. But the length was not full enough to draw the edge.

Dhawan prospered when Broad went too straight, fully aware that there was no fine leg. Smartly, he he shuffled and clipped two fours off the pads. When the ball was a foot outside off stump, Dhawan let it be. When it zoned in on the stumps, he covered the line, jammed the bat down and hurried singles. On other days, Broad would have bowled worse than 4-2-13-0 and picked up a wicket.

Rahul was not as fluent, going 29 balls between his first and second boundaries, but when he hit three in the span of nine balls faced, it looked like it was India s session for the taking.

Then Woakes struck, producing the edge from Dhawan that went straight to second slip. In his next over, Woakes swung one in sharply to Rahul who was given lbw, only to review it on Cheteshwar Pujara s advice. It proved a wasted review, for replays showed Rahul was struck in front of leg stump. Moments later, Pujara hooked a short ball from Woakes and found Rashid at long leg. England took lunch on a high, but Kohli and Rahane dulled their senses when play resumed. 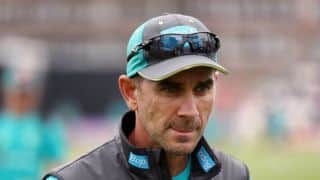 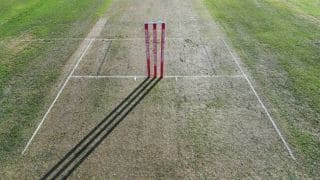