The venue for the third India vs England Test starting Saturday is Nottingham s Trent Bridge, where the record for the visiting team since 1959 stands at one win, two losses and three draws.

Statistically, that makes Trent Bridge India s third most successful venue on tours of England, after Headingley and Lord s. In six visits to Leeds, India have won two Test matches; at Lord s, they have managed to win two of 18 Tests; at Trent Bridge, India have won one out of six Tests.

India s first Test at Trent Bridge was back in 1959 when Dattu Gaekwad s team was defeated by an innings and 59 runs. A century to England skipper Peter May was the highlight of England s 422, after which India were bowled out for 206 and 157.

India s next fixture at Trent Bridge came 37 years later, in 1996. On this occasions, centuries to Sourav Ganguly (136) and Sachin Tendulkar (177) – click here for video highlights – and 84 to Rahul Dravid led Mohammad Azharuddin s team to 521 after the tourists opted to bat. England, however, replied with 564 thanks to centuries to captain Mike Atherton (160) and captain-to-be Nasser Hussain (107). Batting a second time, India were bowled out for 211 as a draw was completed.

During the summer of 2002, India, led by Ganguly, returned to Trent Bridge and managed to draw again. Virender Sehwag s 106 was the highest score of their first innings of 357, and after England put up a massive 617 – with Michael Vaughan hitting 197 – the onus was on the tourists to escape defeat. An awful start of 11/2 was turned around by Dravid (115), Tendulkar (92) and Ganguly (99) and the draw was achieved.

In 2007, led by an exemplary performance from Zaheer Khan, India went up 1-0 in the three-Test series at Trent Bridge. India s fifth win in 47 Tests on English soil dating back to 1932 owed plenty to England s attempt to unsettle Zaheer when he was batting with their jelly-bean prank backfired. When it was his turn to bowl at England a second time, Zaheer – who had claimed 4/59 in their first innings – claimed 5/75 to set India on the way for a seven-wicket win that proved massive in the eventual series outcome. India drew the third Test to win their first Test series in England since 1986.

Four years later, India were utterly smashed at Trent Bridge by 319 runs. They made the right moves by dismissing England for 221 after MS Dhoni chose to field, but struggled to put up a significant total. Dravid, opening the innings, made 117 out of a total of 288 as Stuart Broad took six wickets in a fine bowling show. Then England piled on the misery with 544, leaving India to chase an unattainable 478. Needing to bat out time for a draw, Dhoni s team crashed to 158.

In 2014, on a Trent Bridge surface maligned for its sluggish, un-English nature, Dhoni s team emerged with a draw in the first of five Tests. Dhoni won the toss and opted to bat, after which Murali Vijay produced a superb 146 that set India on course for 457, with help from the skipper s 82 and tail-end fifties to Bhuvneshwar Kumar (58) and Mohammed Shami (51*). England made 496, with Bhuvneshwar claiming 5/82, which left India to salvage a draw. It proved tough, for they slipped to 184/6 before the debutant Stuart Binny (78) and Bhuvneshwar (63*) took India to safety.

Virat Kohli s India, down 0-2 in the series, could do well to imbibe some of past Indian team s endurance at Trent Bridge. 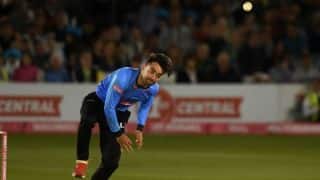 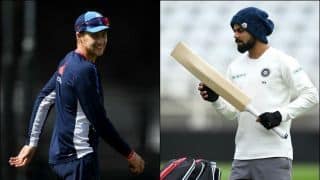