India vs England, 3rd Test: Trent Bridge is the perfect ground to go with a 2-0 lead: Stuart Broad

India vs England, 3rd Test: Trent Bridge is the perfect ground to go with a 2-0 lead: Stuart Broad

Heading in to the third Test against India with 2-0 series lead, England seamer Stuart Broad reckons that Trent Bridge is the perfect ground to wrap the series with a win.

Heading in to the third Test against India with 2-0 series lead, England seamer Stuart Broad reckons that Trent Bridge is the perfect ground to wrap the series with a win.

“I think as an England side we have had some wonderful matches at Trent Bridge,” Broad told the Nottinghamshire Post, adding, “We  generally tend to do very well here, probably this is the perfect ground to come in with a 2-0 lead.”

Trent Bridge is of course Broad’s home ground and the 32-year-old feels relaxed playing here and that in turns maximises his performance.

“I have good memories of playing for Nottingham and England and even if I don’t get it right in my first few overs, knowing that it will come good for me at some stage, having the confidence in this ground, I feel comfortable and it does allow my performance to be better,” said Broad.

In eight matches that Broad has played at Trent Bridge, he has picked 37 wickets at an average of 20.43 and has also registered career-best figures 8 for 15 at the very ground against Australia in 2015. His partner in crime, James Anderson has 60 wickets, including seven five-wicket hauls, at a cost of 18.95 runs in just nine matches.

One of the Broad’s fondest memories in Test cricket came at Trent Bridge in 2011 when he picked up a hat-trick during the second Test against India, finishing with eight wickets and bagged the man-of-match award in England’s 319-run win.

“I look back at my hat-trick in 2001 and it was the loudest things I ever heard on a cricket ground,which is testament to the 17,000 who were in,”recalled the 32-year-old.

Talking about the England’s good run in the series so far, Broad  pointed out that not thinking too far ahead has been the key to the team’s success.

“One thing that has been a great strength for our team couple in the last couple of week is that we are not focusing on the results and not looking too far ahead. We have been talking about winning the next hour and we have players in the team that can influence the game in quite short period of time.

“Whether we bat or bowl, it is about winning the first hour, and if things do not go to plan, we make sure to win it by lunch; that is the language we are talking rather than making it to 3-0 and if we get our jobs right as individual players, the results will take care of of itself,” he added. 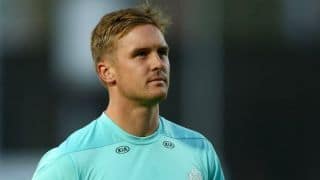