At 307/6 at stumps on day one of the third Test, with the debutant Rishabh Pant looking very comfortable on 22, India will have genuine designs on batting England out of the match.

The first batting pair to stand up after the abject failure at Lord s, the latest opening act of Shikhar Dhawan and KL Rahul , had done well to add 60 before Chris Woakes grabbed three wickets in a testing spell. Crucially, they played out seven overs James Anderson – the king of swing at Trent Bridge – before Dhawan opened up with some smart nudges to fine leg off Stuart Broad and two rasping cut shots off Ben Stokes. Rahul was not as fluent, going 29 balls between his first and second boundaries, but when he hit three in the span of nine balls faced, it looked like it was India s session for the taking.

Then Woakes struck, producing the edge from Dhawan (35) that went straight to second slip. In his next over, Woakes swung one in sharply to Rahul (23) who was given lbw, only to review it on Pujara s advice. It proved a wasted review, for replays showed Rahul was struck in front of leg stump. Moments later, Pujara hooked a short ball from Woakes and found Rashid at long leg. England took lunch on a high, but Kohli and Rahane dulled their senses when play resumed.

The pair scored at a healthy clip, courtesy a blend of fluent and fortuitous boundaries, and saw out the first hour after lunch without further loss. Kohli was assured as the afternoon session began, barring one very confident lbw from Woakes, who he then drove languidly past the covers for four. A filthy full toss from Ben Stokes was duly twirled away for four four past midwicket, further underlining the growing feeling that dropping the left-arm seamer Sam Curran was a big mistake by England.

The arrival of Adil Rashid saw Kohli move past Rahane, with an easy-as-they-come short ball whipped to midwicket and a loopy wide ball smashed to the deep extra cover boundary. Rahane had several heart-in-mouth moments, twice against Stokes when he stabbed in the air between cover and point and edged wide of third slip and off Woakes when a leading edge flew past gully. Fruitfully, each of these loose strokes resulted in boundaries. As the runs came, Rahane s half-heartedness dissipated and he raised his fifty off 76 balls, not long after Kohli reached his in 74.

The first hour after tea was dramatic. First ball, Rahane pushed a half-volley from Broad past extra cover for four. Then Anderson dropped a cut shot at cover-point to give him a life on 56. On 57, Rahane edged to the slips where Keaton Jennings at third was slow to react and let four more go by. In the ninth over of Woakes third spell, three boundaries came: a fine cover-drive from Kohli sandwiched between a clip off the pads and a cut from Rahane. That second boundary took Rahane into the eighties, It was during this period of aggression from Rahane that he perished.

On 81, he drove hard at Broad and was superbly plucked, one-handed, by Alastair Cook at first sip. This was deserved for Broad, who had bowled very well in the first seven overs that eight-over spell.

Kohli, 75 at the time, looked set for a second Test century of the series until, like Rahane, he too perished to a booming drive. The difference was the bowler, Rashid, was in the middle of a very average spell, unlike Broad, and that Kohli fell three runs short of a century. Kohli was livid with himself when he looked up at the giant TV screen as he neared the boundary line.

Pandya and Pant ensured the momentum was not lost. Pant s first scoring shot in Tests was a second-ball six off Rashid, back down the ground, and when the new ball came he played with a good stride forward and left with ease. Hardik Pandya (18) displayed sound awareness of where his off stump was for 57 deliveries, until Anderson managed an edge which was held at second slip. 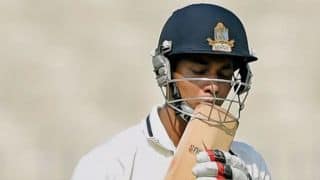 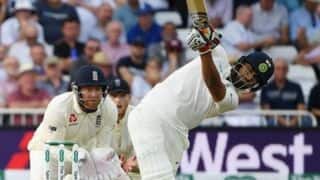 India vs England, 3rd Test: Rishabh Pant first Indian batsman to open his account with a six in Tests