It won t be long before each run scored by Indian captain Virat Kohli becomes a milestone in itself as the 29-year-old continued his terrific run in England on day three of the third India vs England Test match at Trent Bridge, compiling his 23rd Test hundred, and in the process racked in milestones and landmarks going ahead of someone or the other in some list or the other.

During his knock, Kohli went past the 50-run mark in each innings of a Test for the ninth time and when he got to 63, he became only the sixth Indian player to score 400 plus runs in a Test series in England.

As a captain Kohli s 430 in the series so far is second best for any Indian captain in a Test series, behind, well his own tally of 449 against Australia in the 2015-15 series.

And with that Kohli equalled Virender Sehwag s tally becoming the fourth-joint in the tally of most Test hundreds by an Indian, after Sachin Tendulkar (51), Rahul Dravid (36) and Sunil Gavaskar (34).

Incidentally, Kohli aggregated 200 runs in the Test scoring 97 in the first innings and 103 in the second, thus making his effort the 12th time that Kohli has made 200 plus runs a Test match. Only four others have done it more times than the Indian skipper. Kumar Sangakkara (17), Brian Lara (15), Don Bradman (14) and Ricky Ponting (13).

In the list of most centuries by Indian batsmen in SENA countries (South Africa, England, New Zealand and Australia) in Tests, Kohli is now only behind the great Sachin Tendulkar. Tendulkar has 17 centuries in SENA countries, while Kohli is at 10. Rahul Dravid also got 10 centuries against the four nations at their respective venues followed by Sunil Gavaskar (8) and Mohammed Azharuddin (6).

Kohli also registered 400 plus runs in the series, with two more matches to go and this is the fourth time he has done that making him second in the list of Indian captains to do that followed by Sunil Gavaskar, who has made 400 plus runs as Indian captain five times in a Test series.

Kohli also went past Mohammad Azharuddin’s tally of 426 runs (in 1990) to become the highest run-getter among Asian captains in a Test series in England.

This was the ninth time Kohli has made 50+ in both innings of a Test. For India, only Rahul Dravid (10 times) has done it more. Gavaskar, VVS Laxman and Tendulkar have also done it nine times. 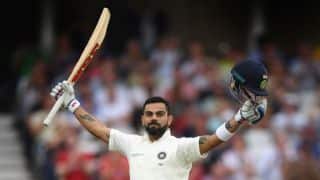