India captain Virat Kohli surpassed Sourav Ganguly to become the Indian captain with the second-most Test wins with India s 203-run win over England on day five of the third Test at Trent Bridge,Nottingham on Wednesday.

With India just one wicket away from a win, Ravichandran Ashwin provided the breakthrough with the wicket of James Anderson in the third over of the day. This is Kohli s 22nd Test win in 38 matches in charge.

Ganguly had 21 win in 49 matches as captain while the tally is led by MS Dhoni who had captained India in 60 matches registering 27 Test wins.

It was exceptional Test match for India. They were down and out after the second Test at Lord’s and the Kohli-led team showed great character to bounce back from a morale-deflating loss and have registered a comprehensive win.

The series stands 2-1 now, still in favour of England but this victory has spiced things up for the remaining two Tests. 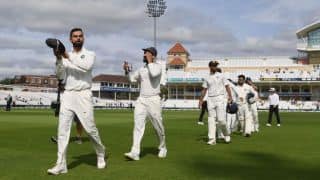