Virat Kohli on Sunday recorded the highest individual score by an Indian captain, as he scored 235 on Day Four of the fourth Test against visitors England.

Virat Kohli on Sunday recorded the highest individual score by an Indian captain, as he scored 235 on Day Four of the fourth Test in the five-Test series against visitors England, at the Wankhede Stadium in Mumbai. Kohli broke MS his predecessor Dhoni s record of 224 as highest score by an Indian captain, which came against Australia at Chennai in 2012-13. Kohli has had an impressive run both as a batsman and skipper in 2016, which he continued with the third double ton of his career. This was Kohli s 15th century in Test career and his fourth 150-plus score of his career all being registered in 2016. He also became the first Indian to score three double tons in a calendar year. This is not all Kohli was also involved in a record 241-run stand for the eighth wicket along with Jayant Yadav.

Kohli has now gone ahead of Dhoni, who had the top score of 224, he scored against Australia in Chennai in 2014 while at No. 3 is Sachin Tendulkar, who top scored 217 against New Zealand at Ahmedabad in 1999. Kohli has his 211 against New Zealand at Indore at No. 4, followed by Sunil Gavaskar s 205 against West Indies at Mumbai itself. Let s take a look at the table of highest scores by Indian captains in Test cricket:

Earlier, India were in the driver s seat with a 231-run lead in the first innings after they posted 631 runs on the board. Kohli continued with his marathon innings which began on Day Three morning, eventually falling for 235 runs, dismissed by Chris Woakes. In their reply, England made a poor start as Keaton Jennings, who scored a ton in the first innings, was dismissed for an unfortunate golden duck in the second. Alastair Cook and Moeen Ali were the other two batsmen to be dismissed before the tea break. 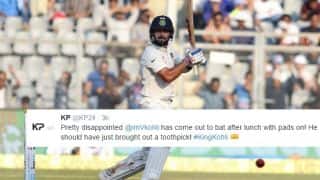 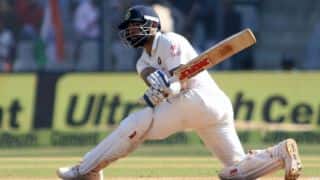