A terrific over from Mohammed Shami, spanning the lunch interval and including the wickets of Keaton Jennings and Jonny Bairstow, followed by a direct hit from the same bowler to run out Joe Root, saw England struggle to impose themselves against India at The Ageas Bowl.

However, with the lead at 125 going into the tea break, and with Sam Curran yet to bat, England have the firepower to knock India out of the Test on a day-three pitch with some uneven bounce and occasional sharp turn. Ben Stokes hard graft of 20* from 79 balls and a plucky 22* off 39 from Jos Buttler has taken them to 152/5.

Moments before the lunch break, Jennings ran Shami wide of the slips for four. Shami kicked the dirt and stormed back to his mark. He changed the angle, got the next ball to stay low and thudded into Jennings’ pads. Jennings reviewed, in vain, and all the hard work of a 59-run stand with Root was gone in a flash.

First ball after the lunch break, Shami completed his over with the wicket of Bairstow who was bowled off the pad as he pushed loosely. There would be no hat-trick, but the reverse swing gained by Shami kept tormenting Root until he was run out by a smart piece of fielding.

Root s duel with Ishant Sharma was also riveting, more so when the bowler moved around the stumps because of his footmark issues. Working up good pace and moving the ball, Ishant beat Root twice and hurried him into his defensive. It was during this period that the England captain was run out on 48, and like in the first Test at Edgbaston it took a moment of confusion and a great pick-and-throw. Called by Stokes for a quick single, Root set off but was found just short as Shami, running from mid-on, hit the stumps. Off went Root, shaking his head in disbelief.

Stokes was lucky to survive a ripped from Bumrah that squared him up, and was kept very quiet by R Ashwin who repeatedly brought him forward to beat the edge. Not for the first time this series, Buttler began in streaky manner by ending Ishant for four, just short of KL Rahul at second slip. Next ball, a flick for three put England s lead past 100.

Buttler appeared edgy in the moments leading into tea as England reached 150, but can gather himself during the break knowing that he has helped his team.

Earlier in the day, Alastair Cook was the first wicket to fall, poking at a delivery from Jasprit Bumrah that angled across him which was held by a juggling Rahul at second slip. Moeen Ali, promoted to No 3 for the second time in his 51-Test career, got to 9 before he edged Ishant low to second slip where Rahul took a fine catch. It needed the third umpire s approval, which Rahul got to hold his 11th catch of the series.That effectively left England at 6/2.

With Ishant getting a bit of swing and Bumrah bowling fast and probingly, England s batsmen were restricted in their shot-making. Jennings tentatively poked and nudged his way through the first hour, from which England scored 29 runs. Wearing the confidence of a batsman facing the axe, Jennings found his runs through dabs into the off side and tucks to leg.

Welcomed to the crease by a chirpy Virat Kohli, Root stood tall, pushed and was beaten, then squirted to point. Back came Ashwin and out came a big heave from Root, which he inside-edged onto his foot. Sensing Root s nerves, Kohli called back Bumrah. Off his eighth ball, Root was rapped on the pads and India went for a review. No dice, as the ball-tracker proved.

Neither batsman looked secure, but critically for England they managed to double the score. The onus is now on Stokes and Buttler to take it out of India s control. 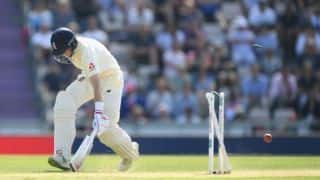