Alastair Cook fell short of his 54th half-century in Test cricket being dismissed for 46 by Ravindra Jadeja in the fourth Test.

Alastair Cook fell short of his 54th half-century in Test cricket but became the first England cricketer to complete 2,000 Test runs against India, during the first day s play in the fourth Test at Wankhede Stadium in Mumbai. He became the sixth overall batsman to reach this milestone against India. Interestingly, his average of 52.63 is the lowest amongst all. Ricky Ponting holds the top spot with 2,555 runs while Michael Clarke is the fifth batsman to reach this feat. The other players in the list include West Indies Clive Lloyd, Shivnarine Chanderpaul and Pakistan s Javed Miandad. Cook has been the most resilient batsman for England. However, he has not proved much with the bat in the previous two Tests after his century in the first game at Rajkot.

England had won the toss and opted to bat. India and England made a few changes to their side. England gave an opportunity to uncapped Keaton Jennings for injured Haseeb Hameed while Jake Ball returned to the playing XI for Gareth Batty. Stuart Broad continued to remain out of the XI as he strained his tendon during second Test. Meanwhile, India included KL Rahul for injured Ajinkya Rahane while Mohammed Shami was replaced by Bhuvneshwar Kumar, who also returned after injury. Wriddhiman Saha also remained out of action with Parthiv Patel retained as the hosts wicketkeeper.

England were 99 for 1 after 26 overs, producing their best start so far on this tour. Debutant Keaton Jennings was batting on 52 not out while Joe Root was yet to open his account.

India have an unassailable lead of 2-0 against England in the five-Test series where the first Test ended in draw. The last time these teams played on this venue, England won by astonishing 10 wickets over India. England spinners dominating performance and centuries from Cook and Kevin Pietersen helped them achieve the feat.

The No. 1 Test team, India, will hope to clinch the series at Mumbai, carrying their all-round performance against England in the fourth Test. 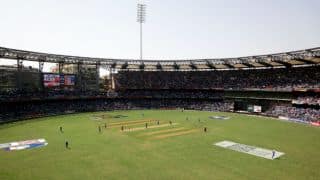 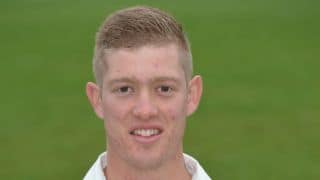