Keaton Jennings and Ravichadran Ashwin star as the fourth Test between India and England is evenly poised on Day 1, at Wankhede Stadium.

Keaton Jennings became only the third Englishman to score a hundred on debut against India, on Day One of the fourth Test at Wankhede Stadium in Mumbai. Trailing 0-2 heading into the fourth of the five-Test series, England opted to bat first, looking to put a mammoth total on the scoreboard. The track, however, produced bounce for the pacers and enough turn for the spinners. Amidst all this, Jennings displayed magnificent show of character and added 99 and 94-run stands with Alastair Cook and Moeen Ali respectively, to put England in command. Nonetheless, Indian spinners turned the tide in the last session and regained control.

Looking at the track, it was evitable that the captain who wins the toss would elect to bat first something Rahul Dravid did not do in 2006, and eventually lost the match. Cook, however, made the right choice and batted with conviction along with Haseeb Hameed’s replacement, Jennings. Though 5 years elder than Hameed, Jennings had tough task to emulate what his teammate had done in the first three Tests. On the other hand, Karun Nair was given another go, as Ajinkya Rahane was already ruled out of the remaining contests due to injury.

As a matter of fact, this was the first time when a Mumbai batsman didn’t feature in India XI, in a match played at Wankhede. In addition, injured Mohammed Shami made way for Bhuvneshwar Kumar.

However, all eyes were on the newcomer Jennings, for he became Alastair Cook’s 12th partner to open the innings, after the retirement of Andrew Strauss (in 2012). Yes, there were those nervous moments that made him edgy at the start, but he continued his stellar County form at the international level.

Kohli missed the trick by keeping Ravindra Jadeja out of the attack early on. For that matter, the tactic did make sense, for there were two southpaws in action. And who better than Ravichandran Ashwin can outfox the left-handers. Moreover, now that India have Jayant Yadav as well, England openers were under fire.

But Cook and Jennings applied themselves sensibly and laid a solid foundation for the batsmen to come. Meanwhile, Jennings reached his half-century.

Kohli eventually brought Jadeja into the attack in the 26th over, and with the bowling change came a wicket.

Cook shimmied down the track to heave one over midwicket, but ended up being stumped. It wasn’t an easy chance though, as the diminutive Parthiv Patel collected it chest-high to dislodge the bells. England went into lunch at 117 for 1.

The post-lunch session saw spinners trouble the Englishmen. Loud shouts, ball beating the edges and few falling short of the fielders: these turn of events made it even more interesting.

All of sudden, it looked like a Day Three track.

A wicket was on the cards, and it was Ashwin who took the most-priced wicket Joe Root.

Then came the resurgence. And to partner Jennings came Moeen Ali at No. 4 (he has batted from No. 1 to No. 9). He had to survive the roughest of storms though, as the Indian troika of Ashwin, Jadeja and Jayant went great guns.

In the mean time, after Bryan Valentines in 1933 and Cook in 2006, Jennings became only the third Englishman to score a ton on debut against India.

Another highlight of the session was umpire Paul Reiffel being hit on the back of his head. Bhuvneshwar Kumar’s throw from deep square-leg left him in pain. After a brief medical attention from the English physiotherapist, he decided to go off the field, eventually getting replaced by third umpire Marius Erasmus.

Like it happened in the India-New Zealand series, last session saw wickets falling at regular intervals. England lost as many as 3 wickets in 19 runs.

First to go was Moeen. After scoring a characteristic 50, he played a rash shot off Ashwin. And then to follow him in the pavilion was the centurion Jennings. Yet again, it was Ashwin who caused the damage.

In other news, umpire Reiffel has been asked to rest on Day Two, with Erasmus taking the Australian umpire s role in the meantime. 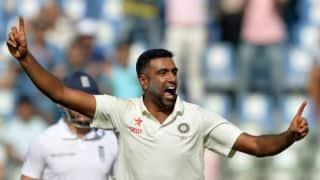 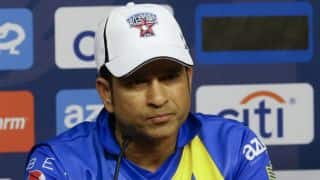