Virat Kohli scored his 15th hundred to give India a 51-run lead on Day 3 of the 4th Test against England at Wankhede Stadium.

Records galore at Wankhede Stadium. Virat Kohli roared at his idol Sachin Tendulkar’s home ground, equalling the latter’s record of most hundreds (4) by an Indian captain in a calendar year. He, after Tendulkar and Rahul Dravid, became only the third Indian captain to score 1,000 runs in a calendar year. He, after Sunil Gavaskar, became only the second Indian captain to score over 500 runs in a Test series. Enough about his knack of breaking records. Moving on, India scored 451 for 7, taking a lead of 51 runs, on Day Three of the fourth Test against England.

Murali Vijay reached his 8th hundred (second of this series) in the morning session, inclusive of 10 fours and three sixes. It was an unusual innings though. He fired on all cylinders at the start, later on adapting the defensive brand of cricket. Though patchy, this staggering knock of his would quash all the talks about his place in the side. Meanwhile, Cheteshwar Pujara fell short by 3 runs to score his 12th half-century. He was castled by Jake Ball with an absolute beauty. He added 107 for the third wicket with the centurion Vijay.

Kohli, without wasting any time, took the bull by its horn and commenced the runs-flow. India went into lunch at 247 for 2, with Vijay on 124* and Kohli 44*. Session Two: Shared Adil Rashid dismissed Vijay right away after lunch, dismissing him on 136. And this is when England regained control over the game. They dismissed Karun Nair and Ravichandran Ashwin in quick succession, courtesy Joe Root’s golden arm. But Jadeja stepped in and fired on all cylinders, just like his captain. The pair knew the track’s behaviour and took the England spinners to cleaners. India went into tea at 348 for 6, with Kohli at 83*. Session Three: Advantage Kohli Rashid struck again immediately after the break. Jadeja, after smashing two fours and a six, fell for Rashid’s leg-spinners. He added 57 runs with captain Kohli. That did not stop Kohli though. He brought up his 15th century with a lovely cover-drive.

Wankhede celebrates as @imVkohli brings up his 15th Test ton. This has been a batting masterclass from #TeamIndia skipper #INDvENG pic.twitter.com/N0xIy2CgNi

To put things into perspective, he has around 4,000 runs. Half of them came while captaining the side, out which half came in this calendar year.

Meanwhile, Jayant Yadav continued his good form down the order. Along with Kohli, he stitched an 87-run stand for the 8th wicket.

India now lead by 51 runs at the end of Day Three.

Kohli will look to bat as long as possible on Day Four and put as much runs for England to erase India’s lead. On the other hand, visitors have no option but to bundle India out to stay alive in the series. 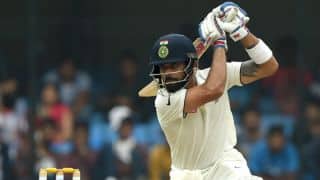