The last time, the crowd at Wankhede Stadium in Mumbai witnessed a Test match on Saturday, was on November 16, 2013. A day etched in memories of cricket fans. Yes, it was the last day for a master in office.

The last time, the crowd at Wankhede Stadium in Mumbai witnessed a Test match on Saturday, was on November 16, 2013. A day etched in memories of cricket fans. Yes, it was the last day for a master in office. Amidst cheers and tears, Sachin Tendulkar bid farewell to the sport at his home ground after 24 years of service at the top level. This Saturday, the city witnessed a spectacle from another master, one who idolises Tendulkar and has made batting look ridiculously easy a habit. Virat Kohli’s 147 not out has once again revived India to a winning position and no one is surprised. Replying England’s 400, India ended Day Three with a lead of 51.

“This is the best lower order batting line-up I have seen for India,” VVS Laxman told CricketCountry recently. Kohli alongside the Indian lower order will look forward to enhance the reputation and eye a lead of 150 at least in order to avenge the Wankhede defeats of 2006 and 2012, and decide the series with a 3-0 lead. Since the 2008-09 (MS Dhoni’s first series as full-time Test skipper), India have not beaten England in a Test series. A 0-4 humiliation in 2011 saw India lose their No.1 ranking, a 1-2 defeat in 2012-13 remains India’s last series loss at home and the 1-3 loss in 2014 only added to India’s miseries.

The hosts took an unassailable lead of 2-0 after the Mohali win and the fourth day’s play will be crucial to determine the winner of the Mumbai Test.

Ravichandran Ashwin and Ravindra Jadeja may not have had happy outings with the bat but will be licking their fingers as they would have observed the turn on offer. Unfortunately, England do not have the quality of a Graeme Swann or Monty Panesar like 2012, to turn things in their favour.

Moeen Ali and Adil Rashid toiled, bowling 89 overs between them but that was it.

Ashwin’s six-for and Jadeja’s four-for kept England to 400, which looked a good total on a surface that had spin and bounce aplenty, and India were without a settled middle-order.

Local boys Rohit Sharma and Ajinkya Rahane missed out due to injuries, which meant Karun Nair was persisted with. In both the wins for England at Wankhede, in 2006 and 2016, England had scored 400 and 413 respectively in first innings.

The first box was ticked courtesy debutant Keaton Jennings’ fine hundred and a defiant 76 from Jos Buttler. However, they allowed Indians to score far too many. Murali Vijay and Cheteshwar Pujara stitched another century partnership with the former going on to shut critics with his eighth Test hundred.

Vijay shared a 116-run stand with Kohli as the duo dominated the Day Three morning. Once Vijay was dismissed, India’s shaky middle-order was exposed. Nair departed, Parthiv Patel paid for his over-aggressive approach and Ashwin fell for a rare nought.

Jadeja, looking very good, could add 25 but shared a vital 57-run stand with Kohli before Jayant Yadav came and held the fort.

A patient 30 not out from one end ensured Kohli play freely as the duo added 87 for the eighth wicket and they remain unbeaten. The lead is 51 and the idea will to be to add another 100. Not to forget there is Bhuvneshwar Kumar yet to bat. He scored many against England in 2014. In fact, everyone in this Indian line-up has First-Class hundred.

Kohli knows there is no room for complacency and India will not want to bat fourth on this track.

England went in with a four-pacer attack. And the four pace bowlers led by James Anderson bowled a collective 45 overs, the same number of overs that Moeen has alone bowled. This raises serious selection questions.

Also, it was the part-time off-spin of Joe Root that claimed the wickets of Parthiv and Ashwin. England will eye wrapping up the remaining 3 wickets and hope for a repeat of their Rajkot second innings where Alastair Cook got his double hundred.

Expect more of spin from England and counterattacking approach from Kohli and co. as the Day Four will determine which team has neared the finishing line. 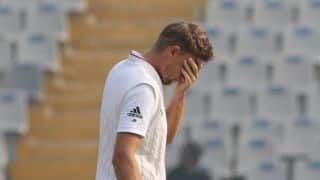