Ravindra Jadeja picks two quick wickets, as England stutter at 49 for 3 against India, on Day 4 of the 4th Test at Wankhede Stadium.

Bhuvneshwar Kumar right away trapped Keaton Jennings lbw in England‘s pursuit of erasing India‘s lead of 231, on Day Four of the fourth Test at Wankhede Stadium. Jennings became only the second player to score a 100 in the first innings, followed by a duck in the second. Meanwhile, Virat Kohli attacked with Umesh Yadav from the other end to make full use of the new ball. The pace duo manage to swing the ball but could not produce further damage, for the track lost bounce as the game progressed. However, 20 minutes into the tea break, Kohli introduced the spin pair of Ravindra Jadeja and Ravichandran Ashwin from both ends.

There were half-chances, for the ball spun ferociously. But Alastair Cook displayed a terrific foot work, getting to the pitch of the ball most of the times. In addition, instead adopting blockathon, he looked to score runs. On the other hand, Joe Root swept deliveries that were pitched up. However, a wicket has to be on the cards when spin is in action on a Day Four track. Thus, Cook joined Jadeja in the pavilion. To dissect the dismissal, it was a cunning set-up by Jadeja. He drew Cook forward for previous deliveries, and then fired a faster one, trapping the England captain in front.

There was more action to follow. Ashwin sharply spun the ball in. Root, on the front, tried to defend it. And as the ball hit Root’s knee roll, Parthiv Patel ran forward and took a catch. He was convinced that Root had produced an inside edge, prompting Kohli to take a review. However, the bat was no where near the ball, and Umpire’s decision stayed.

All the same time, Jadeja dismissed Moeen Ali off the very first ball of the last over before tea. Coming over the wicket, Jadeja maintained the middle-and-off stump line, with a leg-slip in place. Moeen, with his wristy technique, guided it behind the wickets. 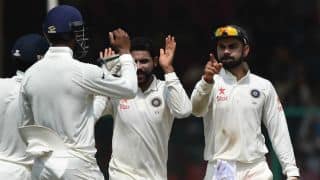