The template of the first hour was a familiar one: India s new ball pair got a wicket each and England struggled.

On a day-three pitch with some uneven bounce and occasional sharp turn, England lost two wickets inside the first hour of play before being revived, albeit nervously, by Keaton Jennings and Joe Root before the latter was trapped lbw by Mohammed Shami with one delivery left in the session.

The template of the first hour was a familiar one: India s new ball pair got a wicket each and England struggled. Alastair Cook was the first wicket to fall, poking at a delivery from Jasprit Bumrah that angled across him which was held by a juggling KL Rahul at second slip. Moeen Ali, promoted to No 3 for the second time in his 51-Test career, began with a play and miss followed by an edge through the slip as he tried to leave Bumrah. Moeen got to 9 before he edged Ishant Sharma low to second slip where Rahul took a fine catch. It needed the third umpire s approval, which Rahul got to hold his 11th catch of the series.

That effectively left England at 6/2.

With Ishant getting a bit of swing and Bumrah bowling fast and probingly, England s batsmen were restricted in their shot-making. Keaton Jennings tentatively poked and nudged his way through the first hour, from which England scored 29 runs. Wearing the confidence of a batsman facing the axe, Jennings found his runs through dabs into the off side and tucks to leg.

Against Ashwin, Jennings nailed a reverse-sweep and sweep for consecutive fours, then top-edged a paddle safely wide of backward square leg.

Welcomed to the crease by a chirpy Virat Kohli, Root stood tall, pushed and was beaten, then squirted to point. Back came R Ashwin and out came a big heave from Root, which he inside-edged onto his foot. Sensing Root s nerves, Kohli called back Bumrah. Off his eighth ball, Root was rapped on the pads and India went for a review. No dice, as the ball-tracker proved.

Root continued to live dangerously, wafting at Shami and inside-edging Ashwin as he played with the turn. Shami rapped him on the back thigh with sharp inwards movement, then got his head out of the was as Kohli intercepted a dab towards third slip and hurled the ball back toward the stumps. Again Ashwin beat him with turn as Root played across the pads, forcing an appeal from India. A lovely punch past the stumps gave Root a welcome boundary, and next ball Shami belted out an appeal as he pulled back the length.

Moments before the lunch break, Jennings ran Shami wide of the slips for four. Shami kicked the dirt and stormed back to his mark. He changed the angle, got the next ball to stay low and thudded into Jennings’ pads. Jennings reviewed, in vain, and all the hard work was gone in a flash. 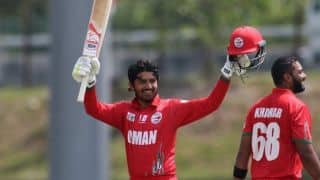 Asia Cup Qualifiers: Oman brush aside Singapore to make it 3 wins in a row 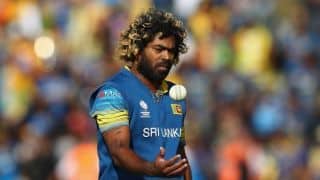