The four fast bowlers who featured in England s win were a relieved and mighty pleased bunch at Southampton.

A 60-run win over India at The Ageas Bowl on Sunday wrapped up the series for England 3-1, with the recalled off spinner Moeen Ali finishing with match figures of 9/134. Speaking after the win, the four fast bowlers who featured in England s win – and who combined for 11 of the 20 India wickets that fell – were a relieved and mighty pleased bunch.

Ben Stokes, who removed Hardik Pandya in the first over after tea and then Ishant Sharma as India slumped to 154/8, termed it a pretty special day .

Came here with a bit of pressure after that performance at Trent Bridge. We crumbled but we showed great character. Pretty special day. The lead that we had was always crucial regardless of their batting line-up. I just thought that the time I spent out there was crucial, said Stokes, who played through a slight niggle.

England s record-setting spearhead James Anderson, who struck twice with the new ball on Sunday, was all praise for Moeen. Mo bowled so well, challenged the forward defensive all day, said Anderson. The pressure he created was immense and made our job so much easier: he s not going anywhere so we can attack a bit more. Once we opened up an end we had a really good chance. It s a really exciting challenge for us to face Virat Kohli I haven t got him out but you have to give him credit.

Stuart Broad, the bowler who took the first Indian wicket to fall on day four, credited England s attack for doing the job at each venue of the series. It s fantastic to win the series. It s been hard work to play in emotionally each day you weren t sure where the match was going to go. Huge credit to both sides really, because both sides have showed amazing character. Even then with 60 needed Ashwin hadn t given up and we still weren t sure, said Broad, who now has 431 Test wickets.

It s been really intense. We ve been helped by the pitches, which have meant our workloads have been manageable. We re very proud as a bowling unit that we ve adapted to every pitch we ve had. Even this one changed during the match it was unrecognisable from day one to day three.

Sam Curran, who followed his pivotal 78 in England s first innings with 46 in the second and then sealed the series with the last Indian wicket to fall, said he could hardly believe what was happening at this stage of his Test career.

It’s a special feeling to contribute to the win and most importantly we have won the series. I am just trying to play naturally as I have done for Surrey, luckily a few have come out of the screws nicely, said the 20-year-old. 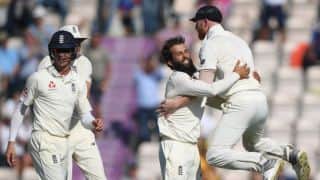 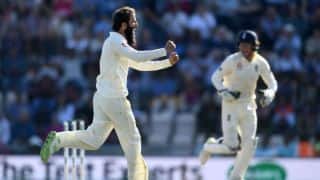