Virat Kohli and Ajinkya Rahane took India to 46/3 at lunch on day four at The Ageas Bowl.

With the ball, India did what they needed to do on the fourth morning at The Ageas Bowl – take the remaining two England wickets in quick time. With the bat, their attempt to chase 245 did not proceed as swimmingly, with three wickets falling inside nine overs.

Far from the start required when you need your biggest ever chase in England to level the series. Virat Kohli and Ajinkya Rahane saw out the remainder of the morning session without loss, taking India to 46/3 at lunch.

For the second time in the Test, Mohammed Shami found himself on a hat-trick after he had Stuart Broad caught behind first ball of the morning. Next ball of Shami s over, Sam Curran averted the hat-trick and moved to 46 before he was run out by Ishant Sharma, which ended England s innings on 271. Having mistimed a sweep, Curran hesitated for the single as James Anderson run down the track, and when returning for the second he was caught short.

England had been dismissed for 271, which set India a target of 245.

It didn t take long for England to strike, as KL Rahul got one from Broad that kept very low and was bowled for 0 off the toe-end of his bat. His tail up, Broad bustled in and bowled straight to draw an edge off Cheteshwar Pujara s bat which dribbles to deep point to get the batsman off the mark. Hands on heads stuff, and you sensed a collapse was about to ensue.

Duly, Anderson moved one into Pujara and struck him on the back thigh. Pujara reviewed Kumar Dharmasena s lbw verdict, but in vain. India were 17/2. In walked Kohli after seven overs, once again let down by his top order.

Dhawan, groping outside off stump, edging past fourth slip, nudging off the pads, falling over as he flicked a half-volley to the boundary, never looked confident. On 17, he nicked Anderson to gully where Ben Stokes fell to his left as he held a good catch.

Anderson walked off after a fine spell of 2/15 in six overs, handing over to Stokes who began with some short balls to Rahane. More than that, it was Moeen Ali s spin and bounce on a fourth-day track that posed more difficulties. Joe Root stuck in a short leg and silly point for Kohli, who mistimed a whip across the stumps and was saved by a spike on the Snickometer. England lost a review, much to Root s frustration because he was convinced it was bat hitting pad. It is a decision which could make headlines, given how fast the third umpire Joel Wilson took to deliver his verdict.

Moments later, England were again left shaking their heads after Rahane reviewed an lbw decision against Curran, bowling from around the stumps, with replays showing the ball hit him marginally outside the line. Still, it is England who will take lunch the happier of the lot. 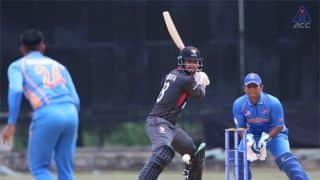