Speaking to Sky Sports, Buttler said that adding runs onto a second-innings score of 260/8 could be match-winning for England.

England ended the third day at The Ageas Bowl with a lead of 233, courtesy Jos Buttler s partnerships of 56 with Ben Stokes (30) for the sixth wicket and 55 for the seventh with Sam Curran (37*), and the man of the moment believes that the hosts are on the verge of a total that will be out of India s reach.

Speaking to Sky Sports after stumps on Saturday, Buttler said that adding runs onto a second-innings score of 260/8 could be match-winning for England.

“We’ve got plenty to work with already but anything about 250 would be a great number to try and eke out tomorrow morning. That would give us plenty of runs on a challenging pitch, he said. “You go through phases batting on this pitch – at times it feels like a good wicket but then a couple of balls will spin from the rough and then you find it harder for a bit. A few have kept a bit lower and brought the stumps into play as well.

“You are always trying to find the right balance between attack and defence. We got it wrong in the first innings and it was an obvious one to address for the second innings. But you’ve got to look to score runs, especially in a low-scoring game like this one.”

Buttler walked to the crease after Jonny Bairstow was bowled by Mohammed Shami first ball after lunch on day there, and after a nervous start settled into a groove to score a vital 69, which took his tally to 421 runs in six Tests since being recalled in May.

Buttler faces a tough last two days as he keeps wickets on a pitch already showing uneven bounce and the occasional extravagant turn, but said he was ready for the challenge.

“It may be tough but it is fun and you think chances will be coming so I’m looking forward to it, he said. “All our bowlers will be a threat, not just Moeen Ali and Adil Rashid. James Anderson and Stuart Broad are fantastic bowlers in all conditions. The new ball will be an important period in the game – when the old ball got softer it became easier to bat.” 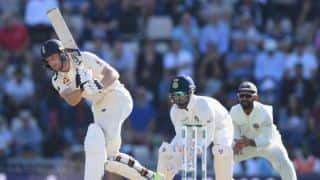 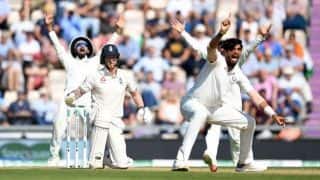