After making a resounding comeback to Test cricket with nine wickets in England s series-clinching win over India at Southampton on Sunday, the offspinning allrounder Moeen Ali has admitted that being dropped allowed him to sort himself out and rediscover his love for cricket.

Moeen, who last week scored 219 and took eight wickets for Worcestershire in the County Championship, had ostensibly been picked in England s XI for The Areas Bowl for his batting skills but it was his offspin that proved destructive as he claimed 9/134 – just short of recording his second 10-wicket match haul. After taking 5/63 in India s first innings, Moeen inflicted defeat on Sunday with 4/71.

Great to be back. I have missed Test cricket a lot. Needed a break just to appreciate everything in general, to enjoy my cricket again, said Moeen after accepting the Man-of-the-Match award. When I was watching the guys at home, I missed it. Great to come back and contribute. Playing in England for a while now, back myself a bit more. Got more confidence from county cricket.

When England batted a second time, Moeen came out at No 3 instead of his skipper Joe Root. Asked about the promotion up from No 7, he said it was a spur-of-the-moment decision.

“Rooty just came over and said to me ‘do you want to bat at three or seven?’ I was pleased to bat three, I said Rooty is best at four. It didn’t work for me but he got some runs, he said. “I’d love to have another go at some stage. I don’t know if I will but I feel really good with the bat. The Indian seamers bowled really well but we’ll see what happens in the future.”

Root, the winning captain, said this was the best he had seen Moeen bowl in Test cricket. A bit of time away from this environment can help. Have spoken with Mo about that. Today was probably the best I’ve seen him bowl in an England shirt, he said. That is testament to his strength of character – and the strength of depth we have in the squad.” 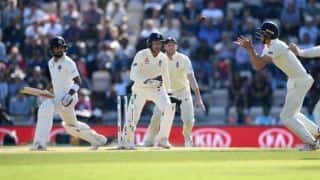 India vs England, 4th Test: We were always under pressure: Virat Kohli