Back at the scene of his most successful day as a Test-match spinner, Moeen Ali ran through India on the fourth evening at The Ageas Bowl as England surged to an outstanding 60-run win that sealed the series 3-1 with a game to play. Getting the ball to spin big and with occasional bounce, Moeen took 17.5 overs to strike but when he did it was with the immense wicket of Virat Kohli for 58 nine minutes before tea.

He then added Ajinkya Rahane (51), Rishabh Pant and Mohammed Shami to finish with 4/71 – after taking 5/63 earlier – as India folded in a stinking heap, with Ben Stokes grabbing two wickets in a crippling 10-over spell. Fans of Indian cricket can be excused for having an overwhelming sense of deja vu about Moeen’s success at the same venue at which he bamboozled India in 2014 as England roared back from 0-1 to march to a 3-1 series victory.

From 126/4 at tea, with a gargantuan 119 runs to get on a tough pitch, India surrendered their last six wickets in 16.3 overs. Bowling England out for 271 left India to chase 245 for the win, and they never got close despite a 101-run stand between Kohli and Rahane the revived the innings from the depths of 22/3.

The end was swift. Stokes removed Hardik Pandya in the over after tea, edging low to Root a second slip; Pant tried to banish the tag of India s joint-longest duck by hitting himself out of of trouble, succeeding in getting 18 off 12s and then carved Moeen to deep cover. Rahane raised his fifty off 147 balls, having hit one four, and was removed by Moeen for 51, using the last review more out of desperation than conviction. Bowling straight and quick, Stokes won an lbw appeal against Ishant Sharma; Moeen had Shami heaving to cow corner; and the win came when Sam Curran returned and trapped R Ashwin lbw for 25.

Axed from England’s Test squad in March, Moeen has made a comeback that will make it impossible to drop him for the foreseeable future. If there is a better Test spinner in England, let him step forward.

From the time he came on, Moeen s spin and bounce on a fourth-day track posed the most difficulties. In the morning, Joe Root stuck in a short leg and silly point for Kohli, who mistimed a whip across the stumps and was saved by a spike on the Snickometer. England lost their first review, much to Root s frustration because he was convinced it was bat hitting pad. Replays showed there was no inside edge, which brings into poor light Wilson s decision as third umpire as he did not consider the possibility that the snick on Ultra Edge could have been bat hitting pad rather than ball on bat. Which, as replays showed, was the case.

The second time, post lunch, a sharply spinning delivery from Moeen kept low and hit Kohli just outside the line. England s last review was gone, and Kohli, on 17, moved on.

In between those two lost reviews, England were again left shaking their heads after Rahane reviewed an lbw decision against Sam Curran, bowling from around the stumps, with replays showing the ball hit him marginally outside the line. On 19, Rahane then survived a caught-behind shout from Stuart Broad, with Bruce Oxenford shaking his head. Replays, and Ultra Edge, showed nothing on the ball.

The reviews done, England looked on as Kohli survived another huge appeal from Adil Rashid when he played across a googly.

The afternoon session was riveting, because of how Rahane and Kohli had to deal with spin. Against Moeen, their approach was to get outside the line to remove the chances of getting out lbw. Moeen created shouts and intensity around the bat, and had both batsmen hurrying into their shots. Thus, it was odd to see Root employ a cover sweeper and a man back on the leg side. The fifty-run stand, fittingly, came up with Kohli bashing Rashid through mid-on for four.

Kohli dealt almost exclusively in pushes and deflections, including the one through square leg that brought him just fifty from 114 balls – as he relied on his mental strength to carry him and India into a position from where they could hope to reach stumps unscathed.

His partner for 42.2 overs, Rahane, operated with calm accumulation and plenty of leaving to keep at bay the chances of a collapse. He grew in confidence against Moeen and by the time tea was taken, had figured out how to play him very well. A majority of his runs came from turns around the corner, against pace and spin, which ensured that singles came frequently to add to England s frustration.

Kohli, having crossed 500 runs for the series and 4,000 as Test captain, was dropped the ball before he was taken at short leg – by the same fielder, Alastair Cook. It was fitting that Moeen broke through, because he was England’s most potent bowler on the day.

At 126/4 you sensed that India had no chance of getting the required 119 runs with a four sessions left at Southampton. But that they would collapse in a heap after tea well, that is something this Indian team under Kohli needs to be held accountable for. 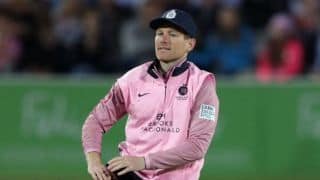 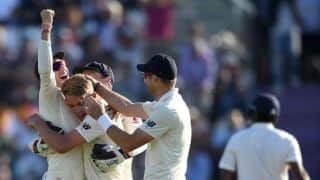