If India win at The Ageas Bowl to make it 2-2, the fifth Test at Kennington Oval becomes a must-win for both sides.

A 203-run win at Trent Bridge has kept Virat Kohli s India alive in the five-Test series, and now sets up the fourth Test at Southampton as a potential series-decider. Should Joe Root s England bounce back at The Ageas Bowl, where four years ago they pummelled India, the series will be won. If India win to make it 2-2, the fifth Test at Kennington Oval becomes a must-win for both sides.

England head into the fourth Test with several tough decisions to make, chief among them whether to play Jonny Bairstow as a batsman, who is desperate to play even after fracturing a finger at Trent Bridge. *

Mohammed Shami has spoken of India s plans to target Bairstow should he play, which adds spice to an already engrossing Test series.

India also have an injury concern in the form of R Ashwin, whose stiff groin restricted his bowling in the last Test. A green Ageas Bowl surface has raised eyebrows, for it gives India a big flip now that Jasprit Bumrah has returned with a bang.

It was at Southampton, famously, that England won the third Test against India four years ago to mount a resurgence that saw them come back from 0-1 to win the series 3-1. India will hope history does not repeat itself.

Weather: Partly cloudy with a high of 20 degrees.

England named their XI on the eve of the match, handing recalls to Sam Curran and Moeen Ali with Chris Woakes out with a thigh injury and Ollie Pope dropped. This means a double spin attack in Moeen and Adil Rashid.

If you go by Kohli s yardstick, then changes are imminent for the 38th Test in a row. If Ashwin is not passed fit, then the only spinner left to pick, Ravindra Jadeja, will get the nod. Umesh Yadav could also return at the expense of Shami, given how far behind Bumrah, Ishant Sharma and Hardik Pandya he was at Trent Bridge.

If the track remains green, India could be tempted to add a batsman given how they failed at Lord s, in which case Karun Nair could step in.

With Shikhar Dhawan and KL Rahul getting some runs at Trent Bridge and Ajinkya Rahane contributing a vital 81 in the first innings, there is no chance of the two fresh faces in the Test squad, Prithvi Shaw and Hanuma Vihari, being handed a debut.

We’ve been able to learn a great deal from Anderson. So far, what I’ve learnt from Anderson is this: the stricter and the more accurate you are, the better it is.” – Shami

“I think there s obviously conversations to be had but I was asked if I was comfortable batting at No 5 and keeping [at the start of the summer] and it s been successful. I m still desperate to try to keep my place as the keeper. – Bairstow

* This article was updated at 6:40pm IST to include the news of England naming their XI. 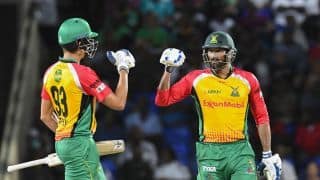