England legend Alastair Cook bowed out of international stage in style aggregating 218 runs in his final Test match, putting him in fifth position for most runs scored by a player in their final match.

England legend Alastair Cook bowed out of international stage in style aggregating 218 runs in his final Test match, putting him in fifth position for most runs scored by a player in their final match.

After a workhorse-like knock, a trait that will always be associated with Cook which fetched him 12,472 runs at an average of 45.35, the 33 year-old fell to debutant Hanuma Vihari, after he had lost his skipper Joe Root (125) the previous ball.

Cook tried to cut a wide delivery from Vihari only to get a faint edge and Cook s career came to a tame end. While everybody knew this was Cook s last innings, but the way he batted, he rolled back the years and it felt as if he wouldn t get out, yet against the run of play, it was the kind of dismissal one wouldn t expect from Cook. But that s how cricket is.

But the England legend, leaves behind a legacy. The former captain is the England s most capped Test cricketer, highest run-getter, most prolific century-maker, skipper to have lead the side the most times for England, second best win-loss record as a skipper behind Michael Vaughan.

He surpassed Kumar Sangakkara to become the most successful left-handed batsman in Test cricket in terms of runs during the innings. He also surpassed Steve Waugh to be at No 10 in the list of most hundreds in a career with 33 to his name.

He became only the fifth player in the history of the game to score a century on debut and in his last Test match – and probably only the second after Greg Chappell to hit hit a century in his last innings after officially announcing retirement.

His stand of 260 with Joe Root on day four was the second highest stand Cook has ever been involved in after 329* with Jonathan Trott at the Gabba in 2010. 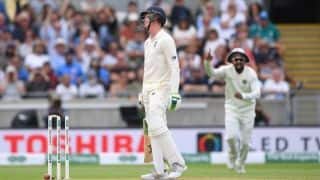 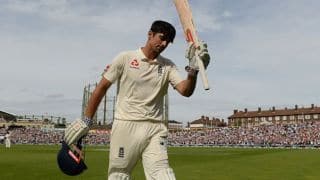