“It is difficult to write match reports of such a show,” observed a senior journalist. “Plenty of expletives can be used while we talk about it, but the resources are limited while producing words for print.”

It summed up the Indian innings to a nicety. But, at the same time, there was one incredible show of resistance and resolve from a captain who shrugged off the spineless batting show to provide the one and only backbone on display.

James Anderson picked up Stuart Binny almost immediately after resumption. Once again the ball hovered in the channel, moving away, the bat chased, the edge touched and first slip was in business. It was 44 for six. India had avoided the embarrassment of matching the ruins of 42 all out of 1974, but it seemed only by whiskers.

MS Dhoni drove a couple of boundaries off Stuart Broad, the bottom hand pronounced, even off-side drives giving a genuine impression of being flicked. But, whatever be the technical chasms, he was still there, having faced over 50 deliveries.

When a few pigeons encroached on the strip, thus holding up play for a minute, Ravichandran Ashwin offered one of the birds his bat. Perhaps the feathered friends would not have done much worse than the Indian top order. The flock did show admirable resistance in standing ground even when shooed. When Ashwin struck an on drive for three, it travelled through a contingent of the birds, but only a couple seemed perturbed enough to take flight, and that too for a very very brief while. A neatly struck cover drive in the next over went for a run less, but achieved better results with the pigeons, sending a fair number fluttering in the air.

Apart from the scattered glass boxes for the corporate honchos, The Oval was packed to capacity. At last, with Ashwin and Dhoni at the crease, they were getting a semblance of fight from the Indians. It did not last though… Ashwin, playing and missing with fair regularity outside the off-stump, finally managed an edge off Woakes and Joe Root picked up a blinder at gully. The television replays vindicated his brilliance even as the batsman waited. India were 68 for seven. The 24-run partnership had been the highest of the innings, a prolonged tale of woe.

Dhoni gave vent to his frustrations with a brutal cover drive off Woakes that scorched the turf. Unfortunately Bhuvneshwar Kumar tried to follow his example, and an ungainly strike was taken by Jos Buttler diving in front of first slip. It was 78 for eight.

At the other end, Woakes pitched short and Dhoni flung his bat at it for another boundary through point. When Jordan hurled it short and wide, the Indian captain cut him to the fence again. The wickets continued to tumble at the other end. Woakes bowled at his body and Varun Aaron spooned one back to the bowler. After 45 overs it was 90 for nine.

Yet again, Dhoni squeezed another boundary past point off Jordan. A couple of balls were played to the outfield, singles refused. Come on, now… The old proverb of beggars and choosers raises its unwanted head

Ishant Sharma was dropped off a simple sitter at second slip, managed two scampered singles, at least one of which would have had running right into the pavilion if the throw had hit timber. And Dhoni slashed Jordan hard, over the gully, and it flew to the third-man fence. At long, long last, the hundred was up. It had come at the expensive exchange of 47 overs and five balls. The man with the worst technique among the top order batsmen had stood battling alone in two consecutive Test matches.  He had stitched together forced caution with his inherent aggression with admirable results.

The fight was not over for the Indian skipper. He pulled Jordan for three, and lofted Woakes over mid-off for four. A cut past point gave him a brace, taking him to 49. He refused a single to deep mid-wicket, and then glanced Woakes to the fine leg fence for four to bring up his fourth half century of the series. It had taken 107 balls and was studded with ten boundaries and plenty of resolve.

Anderson was back in the attack from the Vauxhall end after a long eight over spell by Woakes. Dhoni drove him past mid-off for four. The tenth wicket partnership was the highest of the innings now. The skipper celebrated it by lofting Jordan over mid-off for six. The 35 run final wicket partnership finally necessitated the solitary over of Moeen Ali before the tea interval.

The last pair survived the additional 30 minutes claimed before the break. At the interval, India were on 125 for nine, 65 of them to Dhoni — the one sparkling spot in a saga of gloom since the morning. 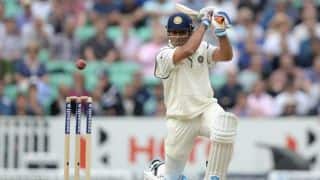 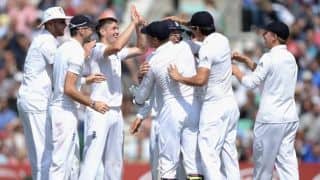