India vs England, 5th Test: Can India finish the series on a high?

India vs England, 5th Test: Can India finish the series on a high?

India have played 12 matches at the Kennington Oval losing four and drawing seven. Their only win came way back in 1971 courtesy off spinner BS Chandrasekhar’s 6 for 38 in the second innings.

Indian coach Ravi Shastri’s claim that the current team has been the best travelling side in the last 15 years may not hold true with the Virat Kohli-led side now losing back-to-back overseas series (South Africa and England), but the counter to that will be the fight put up by India.

While they made it 1-2 with a win against South Africa in the final Test at Johannesburg earlier this year, India will now be aiming for another consolation win at the Kia Oval, the venue for the fifth and the final Test against England, hoping to end the series on a high and a respectable scoreline of 2-3.

However, India have played 12 matches at the Kia Oval losing four and drawing seven. Their only win came way back in 1971 courtesy off spinner BS Chandrasekhar’s 6 for 38 in the second innings.

For England, despite claiming the series, the match holds a certain importance as they would look to retire England legend Alastair Cook with a memorable win.

Kohli leads the batting charts in the series by a long margin with 544 runs and if he can add 200 more runs in the final Test, he will become the captain with most runs in a series in England, surpassing Graham Gooch tally of 752 runs set in 1990.

In the batting front, the fifth Test gives the perfect opportunity for India to experiment. Handing Test caps to Prithvi Shaw and Hanuma Vihari may not be a bad thing – with the intention of throwing the duo in the deep end in England. They have scored runs in England during the India A series just before the India vs England series.

In the bowling department, R Ashwin will most likely be rested as he did not bowl in the nets on Wednesday and seem to have aggravated his side strain. Ravindra Jadeja will get his first game of the series. While the jury is still out on Hardik Pandya, Vihari, can very well be slotted in place of Pandya, considering India will have an allrounder in Jadeja. Vihari is a handy off spinner.

Jasprit Bumrah may also be rested for Shardul Thakur considering Burmah will have to play a vital role for India in in 2018 Asia Cup starting just a week after, and a bit of rest for the Gujarat bowler may not be a bad thing.

For starters, England’s 3-1 scoreline has not been as convincing as it looks on paper and that has been majorly because of England’s top-order struggles. However with the series won, England have announced an unchanged XI. Despite Keaton Jennings averaging just 18.57 in the series, he has been retained while Cook with average of 15.57 is set to play his 161st and final Test at the Oval against the same team he made his Test debut against.

Jonny Bairstow will keep wickets while Moeen Ali has been slotted to bat at No.3 ahead of Joe Root for the final Test. Stuart Broad and James Anderson will lead the attack with 36-year-old Anderson just four wickets away from becoming the highest wicket-taker among pacers in Test cricket 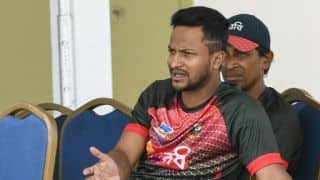