Dhoni has so far faced 704 balls in the present rubber - the most faced by him in a series.

Statistical highlights at the end of first day’s play in the fifth Test between India and England at the Oval, on Friday.

# Mahendra Singh Dhoni is leading India in his 15th Test against England, bettering Sunil Gavaskar‘s tally of 14 — the highest tally by a captain in England-India Tests.

# For the second time in a Test series, Dhoni has registered four innings of fifty or more — the first instance being against Australia in India in 2008-09.

# Dhoni has so far faced 704 balls in the present rubber – the most faced by him in a series.

# Dhoni (82 off 140 balls) has recorded his 12th fifty against England. He has extended his record for most half-centuries against an opponent without registering a century. With Australia’s Monty Noble, he shares a record for most fifties (eight) without recording a hundred in England.

# Dhoni’s captain’s knock of 82 is his third innings of eighty-plus against England in Tests in England – his highest score being 92 at The Oval in 2007.

# Dhoni has registered 55.41 % of runs in India’s total of 148, providing the first occasion of an Indian skipper recording more than 50% of runs in a team innings.

# Virat Kohli has recorded his worst performance in a Test rubber — his aggregate being 114 in nine innings at an average of 12.66. For the first time, he has not registered a Test fifty in nine consecutive innings.

# Dhoni and Ishant Sharma were involved in a stand of 58 — India’s highest tenth wicket stand in Tests when they lost nine wickets for less than 100 runs.

# Before registering 40 runs, India lost five wickets (36 runs) – the sixth occasion when they have lost their first five wickets for less than 40 in an innings in England.

# An Indian opening pair is without a fifty-run partnership in seventeen innings — the last fifty-run stand is 77 between Shikhar Dhawan and Murali Vijay against West Indies at Mumbai in November 2013.

# Ajinkya Rahane has recorded his first duck in eighteen innings in Tests.

# Indian batsmen have registered fourteen ducks in the present series as against three for England – all three from Ben Stokes. 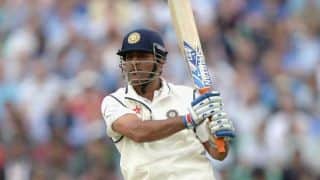 MS Dhoni’s 82 against England in 5th Test at The Oval: Statistical Highlights