England, after winning the toss against India in the fifth-Test, elected to bat first on a typical bat-first wicket, which funnily had turn and bounce from the get-go. Barring a few hiccups, England went past 450-run mark with help from their lower-order batsmen in Liam Dawson and Adil Rashid on Day Two. The centurion from the last Test at Mumbai, Keaton Jennings became the first causality of the England innings, as he gave his wicket to Ishant Sharma. Alastair Cook, who surpassed his 11,000th Test run, did not contribute much with the bat, became Ravindra Jadeja s first wicket in a scalp of many. With the team loitering at 21 for 2, it was Joe Root and Moeen Ali, who dogged their team out of a hole.

Root in particular looked a class apart on Day One, getting boundaries at will and counter-balancing any spin the pitch had on offer by using his dancing shoes. Before becoming Jadeja s second-wicket, Root, bulleted his way to a 144-ball 88. England most prolific wicketkeeper-batsman Jonathan Bairstow came in at No. 5, and beat hollowed his way to a rollicking 49. It was again Jadeja, who provide India with a break-through right at the end of day, nabbing Bairstow. Moeen, on the other hand, from being a jumpy batsman went onto became fluent and classy. He notched up his fifth Test ton to put England in a comforting position at stumps on Day One, with the explosive Ben Stokes batting at the other end.

Day Two began on a somber mood for England as India made a strong-comeback. Ravichandran Ashwin got Stokes wicket in the very first over of the day; fifth time in the series. Ishant too struck soon getting Jos Buttler leg-before for 5 as the batsmen misjudged the line of the ball and played across it. Moeen, who was eyeing a commendable 150, got out on 146 as he lobbed a simple catch off Umesh, handing him his first scalp.

England was 321 for 7 when Rashid and Dawson joined forces. The debutant Dawson, who got struck on the helmet on his very second ball in international cricket, batted exquisitely to notch up a formidable first Test half-century. Rashid, in a bid to show he would not to stay behind, proved his skills with the bat and thumped a Test fifty of his own. The pair added 108 runs, before Rashid fell to Umesh for 60

Stuart Broad, who has had a somewhat downward spiral in his batting, added only 19 runs, before getting run out following confusion. Broad wanted to sneak in a third-run, which was denied as KL Rahul, with a bullet-like throw from the fine leg region found a tumbling Broad out of the crease with the help of Parthiv Patel.

England s final wicket in Jake Ball provided much needed entertainment hitting some booming six and fours during his stay in the middle. Ball did not pick a goggle from Mishra, got his stumps rattled for 12.

For, India Jadeja was the leading wicket taker with 3 wickets to his name, while Ishant and Umesh picked 2 apiece. Ashwin after a very long time had to settle with a solitary scalp besides his name. Amit Mishra after toiling claimed his only wicket in his 25th over. 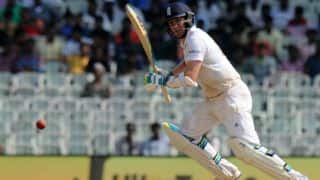 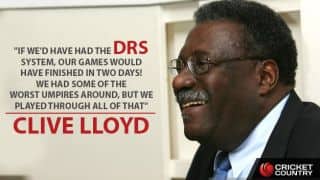