India made early breakthroughs on the second day of their fifth and final Test against England, pegging back the tourists who were looking to make a strong start. Ravichandran Ashwin bagged the first wicket of the game on his home ground, MA Chidambaram Stadium in Chennai when he had Ben Stokes, the overnight batsman caught behind by Parthiv Patel for 6. England suffered yet another blow early on when India seamer Ishant Sharma continued to trouble their lower-order aggressive batsman Jos Buttler and then snared his wicket with a delivery that trapped him in front of the wickets. After 104 overs, England were 321 for 7 wickets.

Moeen Ali, on the other hand, remained in best of forms as he resumed the second day s play from where he left on the opening day of the fifth Test. Moeen has reached a fine 146, and looked well-set to register his highest individual score in Test cricket. But India continued to search for wickets, and Umesh Yadav began hitting Moeen with short deliveries. Moeen’s patience waned off soon, and he was caught at midwicket for 146. Moeen faced 262 balls and struck 13 boundaries and a six to solidify his innings. The two batsmen who fell on the second day morning were Stokes for a 32-ball 6, and Buttler, who made 5 off 17 balls but struggled throughout his stay at the crease. Debutant Liam Dawson joined Moeen at the crease at the fall of Buttler s wicket.

India continued to be poor with their use of DRS, as an appeal which was turned down by Simon Fry from Ishant and others. Virat Kohli decided to review it, but it was a horrible call as the ball had pitched outside off, the impact was not even in the line of the wickets and replays showed it would have comfortably missed the wickets. 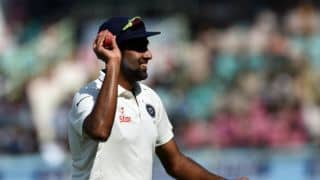 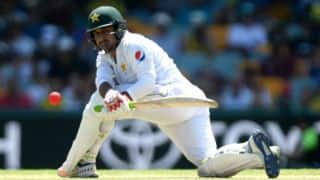