A timely strike by Ravindra Jadeja meant that England went into lunch 68/1 on the opening day of the fifth Test.

Alastair Cook, playing his final match, put on England s finest opening partnership of the series, and along with Keaton Jennings nearly played out a spotless session for England. With 60 on the board, equalling the highest opening stand in the series, comeback man Ravindra Jadeja struck timely to send back Jennings. The dent meant England went into lunch 68/1 on the opening day of the fifth Test at The Oval.

A proud Cook walked out to a guard of honour by the Indian team after his captain Joe Root, for the fifth straight time, nailed the coin toss. The former England captain, unfazed by the slowness and dryness of the surface, started off in a manner that he has for the last 12 years, watchfully. With each passing over though, England realised how wonderful the conditions were for batting. Cook got into action with a typical flick off the pads for four, and as Bumrah operated round the wicket, the left-hander struck fierce cut shot followed by a full-throttle pull.

The beginning wasn t as easy. While a few balls nearly took Cook s outside edge, Jennings was pinned on the helmet early by Ishant Sharma. He was squared up frequently by Bumrah on several occasions but seemed fiercely dedicated to not give away his wicket. The challenging time Jennings endured can be gauged by the fact that he needed 43 deliveries for his first boundary.

Bumrah and Ishant combined to bowl 13 overs up front. But with no assistance from the pitch, Virat Kohli threw the ball to debutant Hanuma Vihari. One over is all he bowled before being replaced by Ravindra Jadeja, playing his first Test of the series. A cautious Jennings reverse swept the left-armer to shake the cobwebs.

With the ball beginning to grip, Jadeja was spot on bowling quick and straight, and almost had Jennings when the ball wrapped him on the pads, only to be saved by an inside edge. Jennings luck however, ran out when he offered a faint tickle to KL Rahul at leg slip. It was Rahul s 12th of the series. 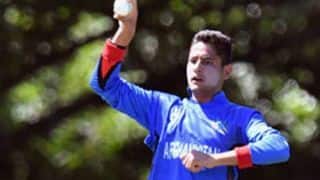