India played out a wicketless session with KL Rahul and Rishabh Pant forging a strong, unbeaten partnership of 177 runs.

India played out a wicketless session with KL Rahul and Rishabh Pant forging a strong, unbeaten partnership of 177 runs. After Rahul had scored his 5th Test century earlier in the day, 20-year-old Pant went on to record his maiden hundred, one that not only raised hopes of a draw, but also has shockingly sparked the possibility of an improbable win for India, who are placed 298/5 at tea, needing another 166.

Pant became the second-youngest wicketkeeper to a Test hundred behind Ajay Ratra, who achieved the feat against West Indies back on 2002. Together with Rahul, Pant recorded India s highest sixth wicket stand in the fourth innings of a Test match, after which he reached the three-figure mark with a six off Adil Rashid.

The fact that India scored 131 runs in the second session with Pant scoring 89 of them is an indication that India are indeed harbouring hopes of ending the series with a win. With 33 overs left, it can very well happen if Pant s intent stays intact.

England seemed content giving James Anderson and Stuart Broad rest and didn t have them bowl after the opening spell till half an hour before tea. Sensing India s urgency, Broad and Anderson were back, after they had tried out Moeen Ali, Ben Stokes and even experimented with skipper Joe Root. They would rue not seizing the advantage of pushing India on the backfoot with back-to-back dismissals of Ajinkya Rahane and Hanuma Vihari before lunch.

India played out a promising first hour of play. Rahul, playing his final innings of the tour, did himself some favour by scoring at a brisk rate once the two wickets fell and brought up his century, fifth overall, first in England, but perhaps the most inconsequential of his career.

He employed back-to-back reverse sweeps off Moeen. Then, on 87, he took Stokes for a six and a couple of boundaries to bring up only the third century by an Indian in the series, one that India could have really done with earlier in the series. He continued from where he d left off yesterday, playing bold and audacious shots. But how much longer can he do that?

Rahul forged just the seventh hundred partnership of the series with Rahane, who was circumspect early on. But there was absolutely nothing in the pitch. A few balls took off and beat the edges but expect those on any morning session. One over from Ben Stokes resulted in 8 leg byes, but Rahane was able to connect a couple of crunching drives off Sam Curran soon after and that seemed to have gotten him in groove.

England introduced spin through Moeen and he straightaway landed the ball in the rough. One stayed low, but Rahul survived the appeal and a review, and continued to bat positively with satisfying footwork. India were on their way to playing out a decent session when Rahane played a poor shot. He top-edged a sweep that was taken by Keaton Jennings at midwicket. Vihari could not add to his debut and was out for a five-ball duck to Stokes. 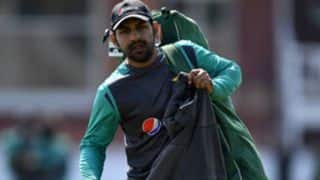