Vihari struck a fine half-century, which was followed by a counter-attacking knock of 86 from Ravindra Jadeja that took India to 292.

For the first time in the series, India s lower order batted with resistance and showed character. Hanuma Vihari, on his Test debut, struck a fine half-century, which was followed by a counter-attacking knock of 86 from Ravindra Jadeja that took India from the brink of conceding a huge first-innings lead to 292. Jadeja forged a 77-run partnership with Vihari, and later combined to add another 43 for the last two wickets to reduce India s deficit to 40.

In response, England were 20/0 at tea on Day 3 of the fifth Test, with Alastair Cook unbeaten on 13 in his final Test innings, 63 shy of overtaking Sri Lankan great Kumar Sangakkara as the fifth-highest run-getter in Tests.

Jadeja s innings, the first since the Test match against Afghanistan in June earlier this year, showed what India were missing at No. 7 in the series. He pulled out a repeat of his heroics at Lord s 2014, only this one being a lot more entertaining, and somewhat crucial in terms of keeping India alive in the match. With a cut off Adil Rashid, Jadeja went past fifty, and a similar sight unfolded. Out came the swirling sword, which he pointed towards the Indian dressing room, almost letting them know that it was a mistake to leave him out of the regular XI.

India had lost Vihari moments before lunch, and Ishant Sharma soon after team. Mohammed Shami tried to hang around, but his tendency to play the big shot let him down again. At 260/9, there didn t seem much hope, and although one had a feeling that Jadeja would bat in one-day, T20 mode, no one expected him to be so effective. He disdainfully crunched James Anderson down the ground for a six and with the field spread out, kept slogging. Besides his flamboyance, Jadeja was patient enough to ensure he always had the strike. At time when he didn t, he gave Jasprit Bumrah the confidence to produce the dead bat. Jadeja was 14 away from his maiden century, and India eight away from 300, when Bumrah was run out.

The beginning wasn t easy for him though. Jadeja had to endure a scratchy first half an hour before flicked Stuart Broad for his first boundary, which gave India a push. His overnight partner Vihari, having battled hard, crunched a couple of boundaries to take India past the 200-run mark, a total that had looked improbable considering India s lower-order struggles. The nervy moments had evaporated and with each passing over, both batsmen grew in confidence. Vihari scampered for a single to bring up his maiden half-century for India.

For someone who was added to the Indian squad and had his selection questioned, Vihari cut a figure complete opposite to the one that batted on Saturday. Yesterday s countless misses, top edges and leg before appeals had converted into crisp drives, confident punches and swift running between the wickets. Stuart Broad and James Anderson had their tail up during the morning session and delivered a probing spell, but Vihari and Jadeja endured and fought it out. The sight of Broad bowling to Jadeja was reminiscent of Mohammed Shami bowling to Moeen Ali in the first innings with countless play and misses. 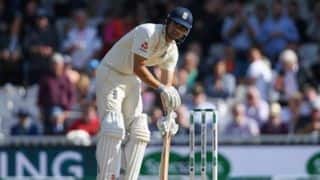