Alastair Cook, playing his farewell game, struck a composed half-century, and aided by some sloppy fielding from India, drove England to 123/1 at tea.

Alastair Cook, playing his farewell game, struck a composed half-century, and aided by some sloppy fielding from India, played out a wicketless session in the company of Moeen Ali to drive England to 123/1 at the tea interval on Day 1 of the fifth and final Test at the Oval.

India dropped Cook and Ali in a span of four delivers. Ishant Sharma, who has constantly troubled Cook in the series, pitched it full and induced a drive. It led to a healthy edge only to be spilled by Ajinkya Rahane at a close gully position. Two balls later, Jasprit Bumrah came round the wicket and sucked Ali into a drive. A tough chance, but Kohli shelled it at third slip going one-handed. The early reprieves set the platform for England, and Cook and Ali cashed in.

They were laborious in scoring runs post lunch. It took five overs before Ali struck a boundary off Bumrah for the first run of the second session. Besides the dropped chances, India lost their first review when Ali offered no shot but the ball seemed to be heading over.

That said, nothing should be taken away from the Indian bowlers. The first-session moisture out of equation, there was movement, and the pace trio of Ishant, Bumrah and Mohammed Shami bowled with plenty of heart. The 34th over bowled by Shami saw Cook play and miss four times. But unfortunately for India, they weren t to get another edge coming their way. They were made to wait but ended up punishing anything slightly loose.

Jadeja dropped a couple of half-trackers and Cook was quick to play the cut shot, while Ali drove with precision. A drive down the ground brought up Cook s 57th half-century and the entire Oval to its feet. He stands 34 short of becoming only the fourth batsman to register a three-figure mark in first and final Test.

A focussed Cook walked out to a guard of honour by the Indian team after his captain Joe Root, for the fifth straight time, nailed the coin toss. The former England captain, unfazed by the slowness and dryness of the surface, started off in a manner that he has for the last 12 years, watchfully. With each passing over though, England realised how wonderful the conditions were for batting. Cook got into action with a typical flick off the pads for four, and as Bumrah operated round the wicket, the left-hander struck fierce cut shot followed by a full-throttle pull.

The beginning wasn t as easy. While a few balls nearly took Cook s outside edge, Jennings was pinned on the helmet early by Sharma. He was squared up frequently by Bumrah on several occasions but seemed fiercely dedicated to not give away his wicket. The challenging time Keaton Jennings endured can be gauged by the fact that he needed 43 deliveries for his first boundary.

Bumrah and Ishant combined to bowl 13 overs up front. But with no assistance from the pitch, Virat Kohli threw the ball to Ravindra Jadeja, playing his first Test of the series. A cautious Jennings reverse swept the left-armer to shake off the cobwebs. With the ball beginning to grip, Jennings offered a faint tickle to KL Rahul at leg slip. It was Rahul s 12th of the series.

Before the toss, Vihari was handed his Test cap by Virat Kohli, making him the 292nd player to represent India in the format. Jadeja was the other change replacing Ashwin, who in Kohli’s words, has aggravated his hip injury which he picked up during the third Test. 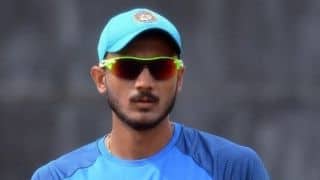