England get a moment to rejoice as in form India skipper Virat Kohli departed for 15 on Day Three of the fifth and final Test of the ongoing Test at MA Chidambaram Stadium, Chepauk, Chennai.

England get a moment to rejoice as in form India skipper Virat Kohli departed for 15 on Day Three of the fifth and final Test of the ongoing Test at MA Chidambaram Stadium, Chepauk, Chennai. India had started off well, with a 152-run opening stand between KL Rahul and Parthiv Patel. The pair opened together for the first time and excelled India lost a couple of wickets in quick succession after this partnership as both Cheteshwar Pujara and Kohli departed scoring less than 20 runs. It was a leg-cutter by Stuart Broad around the wicket, which Kohli tried to drive through the cover but ended finding Keaton Jennings at extra cover. For the first time in the series, Kohli got a score under 40.

Murali Vijay suffered an injury in his left shoulder that barred him from opening. Rahul (30) and Parthiv (28) remained unbeaten at stumps of Day Two as India put up 60 without any loss. The two continued batting on Day Three and played some good-looking shots and reached their individual half-centuries. Parthiv scored his career best 71 before departing but Rahul kept batting despite a troubling right knee. He was joined by Pujara at the crease for a brief period but got to his century with Kohli batting at the other end. This is his first century on home soil and fourth of his career.

Kohli and Rahul brought up 200 for India but the skipper could not last longer at the crease. Rahul is joined by Karun Nair at the crease as India have 211 for 3, trailing by 266, after Kohli s dismissal. India have already pocketed the series with a comprehensive victory in the fourth Test at Wankhede Stadium, Mumbai. 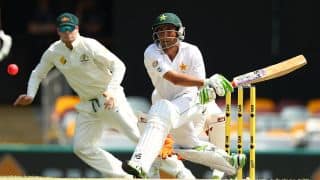