Ajinkya Rahane and Shikhar Dhawan have built on the solid start.

Shikhar Dhawan and Ajikya Rahane are building on the solid start in the sixth One-Day International (ODI) between India and England at Perth. Both batsmen went through a tough phase to begin with but have since batted well and have kept England at bay. The pitch was helping the seamers and they applied themselves well to ensure India get off to a good start.

Rahane was the one who tried numerous aerial shots early in the innings, but they were not middle and fell to ground. This was a bit of a worry as Rahane tends to play too many shots, but he has tempered down to settle down. Dhawan on the other hand has been solid and has played a few good shots. India are 83 for no loss in 20 overs. 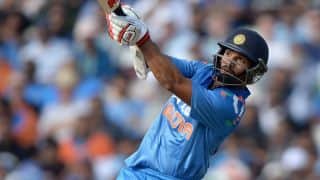