England have lost the wicket of Moeen Ali in their run-chase of 201 against India in the crucial sixth One-Day International (ODI) at Perth. India have set England a target of 201 and England have already lost three wickets, with the openers back in the hut. The winner of this match will qualify for the final. Joe Root also was dismissed. He hit one back to Stuart Binny. England are 54 for four in 18 overs.

Moeen tried to go over the top to Akshar Patel and holed out to long-off. Ambati Rayudu moved across and took the catch inches off the ground. It has been a tough pitch at Perth and batsmen are finding it difficult to get going. 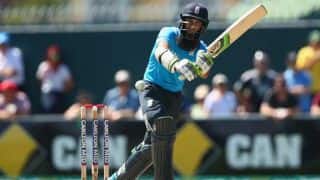