Ravi Bopara has lost his wicket, scoring just four runs in six balls leaving England at 66/5 deepening their worries in their chase of 201 against India. Stuart Binny has taken the wicket, taking his tally to 3 wickets in seven overs. He has only conceded 26 runs.

Jos Buttler and James Taylor are out to bat now and while their at the crease, England still have a good chance, but another wicket will put them on the back-foot. They will now aim to build a partnership instead of going for aggressive shots. 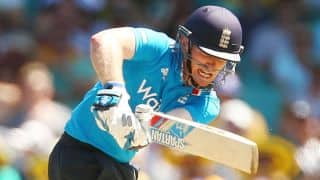