India vs England: Alex Hales ruled out of remaining games with fractured hand

India vs England: Alex Hales ruled out of remaining games with fractured hand

India have already taken an unassailable 2-0 lead in the three-match ODI series.

England opener Alex Hales has been ruled out of the rest of the India tour after scans revealed that he had fractured his hand in the second ODI at Cuttack. Hales travelled to Kolkata with the England team, but the right-handed batsman will return to England as he may need surgery. England have the likes of Sam Billings and Jonny Bairstow in their squad. One of them will likely take Hales place for the third and final ODI at Kolkata. Billings had in fact opened the batting for England in Bangladesh. India have already taken an unassailable 2-0 lead in the series. They won the first match by 3 wickets and completed a 15-run win in the second game.

The series has been a high-scoring one so far. The four innings in the series have all produced 350 runs or more. In the first ODI at Pune, England scored 350, but centuries from Virat Kohli and Kedar Jadhav ensured India got over the line. In the second ODI at Cuttack, India put up 381 on the board, courtesy of brilliant tons from Yuvraj Singh and MS Dhoni. England came agonisingly close, but finished with 366 in the end. To add insult to injury, England were also fined for maintaining slow over-rate at Cuttack.

Dhoni, who relinquished his captaincy ahead of the series, will be honoured by the Cricket Association of Bengal (CAB) before the third ODI. The ODI and T20 World Cup-winning captain will be felicitated before the match on Sunday with a crystal memento, a shawl and a few other gifts. 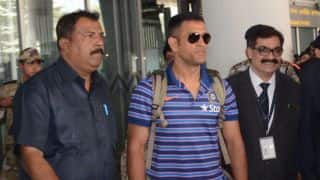