West Indian great Michael Holding reckoned that Indian should never have left out Cheteshwar Pujara from the playing XI for the first Test at Edgbaston, that England won by 31 runs on Saturday.

West Indian great Michael Holding reckoned that India should never have left out Cheteshwar Pujara from the playing XI for the first Test at Edgbaston, that England won by 31 runs on Saturday.

“One thing I would like to see India do is find a way to get Pujara into this team,” Holding told Sky Sports. “I do not understand how they are so reluctant to play Pujara. He’s too good a player.

Pujara, the No. 6 ranked Test player, had only managed 172 runs at 14.33 from six games Yorkshire in the County Championship earlier this year and despite that fact that the Saurashtra batsman felt assured of his place in the XI, he was omitted from the XI with Shikhar Dhawan, who scored a pair in the tour game against Essex, retained as the opener and KL Rahul taking over Pujara s position.

“If Kohli had no form, would they leave him out? I’m not saying Pujara is as good as Kohli because Kohli is way above everyone else. But when you have (for example) a Rahul Dravid, a VVS Laxman or a Sourav Ganguly who is not in excellent form, do you leave them out? No, said Holding.

While Dhawan managed scores of 26 and 13, Rahul could only add four and 13. However, Holding suggested that India should look at the possibility of adding Pujara for the second Test, starting on August 9 at Lord s, at the expense of allrounder Hardik Pandya.

“Pandya, it seems as if he’s the golden boy in this team. Everyone thinks he’s going to be the next Kapil Dev. He hasn’t shown that yet. “Why not pick a batsman (instead)? Pandya got a few runs in the second innings but is he a better batsman than Pujara? I don’t think so, and you don t need him as a bowler in my eyes,” added Holding.

Pandya had little role to play with the ball despite the seamer friendly track as he sent down mere 10 overs in the first and innings and none in the second out of nearly 143 overs across two England innings . With the bat, Pandya fared better scoring 22 and 31. 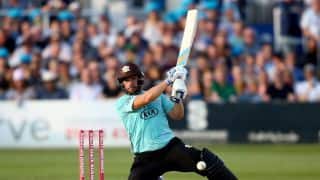