England coach Trevor Bayliss has backed opener, Alastair Cook, saying he is striking the ball well in practice. Questions are being raised on Cook’s form in the recent past, what with no half-centuries in his last seven innings and a string of low scores – 13, 0, 21, 29 and 17 in the five innings that he has played against India in the current Test series.

“Cooky has not changed his demeanour. You wouldn’t know there was any difference between now and when he is scoring plenty of runs. He still practises as hard if not harder than anyone else. You watch him play in the nets and he is actually striking the ball quite nicely. His feet move well. I wouldn’t say he is out of form – he is still hitting the ball well – he is out of runs in the middle. But he is giving himself every opportunity. He practises hard and he still plays an active role in his position in the team,” Bayliss said.

England Captain Joe Root also backed the veteran opener recently and said if people write Cook off, he comes back stronger. It is true however that Cook has gone seven Test innings without a half-century and Keaton Jennings – his 12th opening partner – is yet to cross that mark in his last 14 Test innings. The coach also backed both openers to come good in the next given opportunity.

“When he was with the Lions in Australia last year, it was about trying to get a little more flow to his batting. He is a very upright player so he is probably never going to be one of those guys who gets well down over the front knee and sniffs the ball. It was about a little more rhythm,” he said. “He’s been working on his back lift to get a little more rhythm and flow. It’s no easy task batting against these guys in these conditions which have been difficult. But that’s the job of an opening bat,” the coach added.

After England’s terrible collapse in their first innings in the Trent Bridge test when they lost all their 10 wickets in one session, it was reported that the coach and captain Root led a charged-up dressing room debate post that event. Bayliss accepted that the current set of batsmen in the middle order have an attacking nature and didn’t say that he wanted to change that but he lauded the way Ben Stokes and Jos Buttler went about things in the second innings with that brilliant century-partnership.

“The guys we have in the team play in a certain way. They are attacking-style players, if you like. When you’ve been playing in a certain way for a number of years, it’s not the easiest thing to change in the heat of battle. I don’t know if it is good enough, but it is fact. I can’t say any more than that,” Bayliss said.

“We know they have got to play the situation and the conditions like Jos Buttler and Ben Stokes did (in the second innings). They are all aware of what they need to improve. It’s just taking a little while longer than they would like and we would like,” he set Buttler and Stokes as the guiding light for the team.

Bayliss said that he has not got any magic pill and reposed faith in his batsmen to come out good and play the situations well. “I’d love to be able to give them a magic pill and it happens overnight.” We believe these guys are our best players and will eventually be very good international cricketers,” he said.

“We had a chat on Sunday night and that was what the discussion was around how it happens, why it happens, what to do about it and not letting it happen again. It is not the first time it has happened and we speak about it every time. I think the way Ben and Jos played, the way they went about it was exactly the way we spoke on Sunday night about how to go about things,” he added.

There are question marks related to Jonny Bairstow‘s fitness but it has been suggested that he might feature as a specialist batsman in the England Xi after his inclusion in the squad. In that event, Jos Buttler might have to don the gloves again, even with the backup wicketkeeper James Vince being included in the squad. Bayliss didn’t want to jump to decisions regarding this matter and said that he would want to wait for the reports of the medical staff before taking a final call on the matter.

“Firstly, I think keeping in the next game (for Bairstow) will probably be the most difficult. We’ve got to check with the medical guys in the next few days. They are suggesting he may not be able to keep but might be able to bat. We’ll have to see how it responds in the next few days. If that gives someone else another opportunity it’s like any injury, if someone comes in and does well, then you have a decision to make,” he said.

“The harder thing will be trying to convince Jonny (to give up keeping). That will be a decision that is taken from the team point of view. He is a world-class batsman we know that and one of the difficult things might be convincing Jonny of that,” Bayliss added.

Bayliss confided that the non-inclusion of Sam Curran in the Trent Bridge Test was a bit unfortunate and had restrained words of praise for all-rounder Ben Stokes’s batting but admitted that he was a bit rusty coming back into the team.

“There was no regret about the actual decision (of playing Stokes). We all felt for Sam Curran, who did fantastically well in the two matches he played. Unfortunately, sometimes, even when you’re in form and you don’t get selected, that’s just the way it is. I think there was a little rustiness from Ben’s point of view,” he said.

“Apart from missing the last Test match, he’s had a disjointed summer with injury as well. Watching him bat yesterday, he wasn’t quite a free-flowing and he didn’t strike the ball like we know he can do, but those 170 balls or whatever he was in for will only help him going forward,” the England coach concluded. 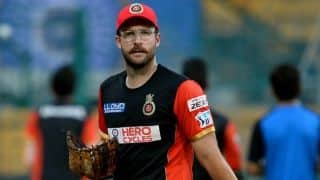