India vs England: England batsmen face chinaman bowlers in the nets to prepare for Kuldeep Yadav

India vs England: England batsmen face chinaman bowlers in the nets to prepare for Kuldeep Yadav

India vs England 2018: Aiming to nullify the threat of India's Kuldeep Yadav, England have called on the services of three chinaman bowlers including former international Samit Patel's younger brother Akhil.

The other two include William Blackwell (Essex) and 17-year-old Sam Wisniewski (Yorkshire).

Samit has represented England in 6 Tests and 36 ODIs while his younger brother Akhil has an experience of six First-class and 11 List A games.

During a net session, overseen by England’s batting coach Mark Ramprakash, Akhil bowled for over two hours including to Test captain Joe Root who faced him comfortably.

“They called me to join the England nets a couple of days back and I was very happy to do it. Of course, the idea is to be ready for Kuldeep,” Akhil was quoted as saying by the Times of India on Wednesday.

During the limited-overs series against England, Kuldeep finished as the leading wicket-taker from either sides in the three ODIs with nine scalps to his name. He also picked up five wickets in the preceding three-match T20I series – the second most.

Akhil was instructed by Ramprakash the areas he should land the ball on and Root in the 28-year-old’s own words, “playing me quite well.”

The first Test of the five-match series between the two sides begins on Wednesday at Edgbaston followed by by Lord s, Trent Bridge, The Rose Bowl and Kennington Oval. 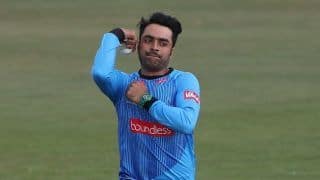