Pant admitted that he was nervous ahead of his first Test and the six was nothing more than just a reaction to the ball.

India wicketkeeper batsman Rishabh Pant surprised everyone when he opened his Test account with a six on debut against England at Trent Bridge. Pant, facing just his second delivery, launched legspinner Adil Rashid into the stands during India s first innings to get off the mark and in the process, became the first Indian to do so on his maiden Test.

However, despite the audacious hit, Pant admitted that he was nervous ahead of his first Test and the six was nothing more than just a reaction to the ball.

“I was nervous. Everyone is nervous when they play their first match. I saw the ball and reacted to it. I was not thinking of hitting it for a six. I was just playing my normal cricket,” Pant told reporters.

When Virat Kohli was undone by Rashid off the last ball of the 76th over for 97, in walked Pant, India s 291st Test player. He started at the non-striker s end watching Hardik Pandya play out a maiden from Ben Stokes before taking guard to Rashid.

Off his first Test delivery he faced, Pant drove confidently to covers for no run. Rashid then flighted one, a googly and WHAM. Pant walked down the track nonchalantly and hoisted one over the bowler s head for a six. His first scoring shot, talk about confidence.

He went on to have a reasonable outing on his debut, scoring 24 in the first innings. But it was his performance behind the stumps that stood out. Pant took a total of seven catches in the match, five of which came in the first innings, which also made him the fourth Indian wicketkeeper to take five or more catches on his Test debut.

“Wicketkeeping in England is always difficult because the ball wobbles a lot behind the wicket. I have been playing for India A since the last two and a half months in England, so it has been helpful for me in my preparation,” he said.

Pant could have had an eighth catch had he been able to grab on to a tough chance of Jos Buttler. Jasprit Bumrah had induced an edge from Buttler but Pant, who was moving down the legside because of the angle created by the bowler was just a tad late to recover and dive to his right. As a result, the ball popped out of his glove. Buttler, then on 1, went on to score a century.

“As a ‘keeper, you have to wait for the outside edge. That is the only thing I can do and that is what I have learnt from it [dropped catch]. It is a big challenge, but the thing is that when Bumrah bowls, he bowls with a different angle,” Pant pointed out.

“So, sometimes we react to it. That day I reacted too much on that ball and the edge came off. I’m not saying that it was not too difficult a catch; I could have pulled it off, but it is part of the game.”

The 20-year-old is clean striker of the ball, a trade that made his the second-fastest century scorer in T20s, and one that was on display during his knock of 128 not out of 63 balls for the Delhi Daredevils against Sunrisers Hyderabad earlier this year. 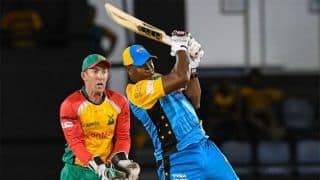