India lost the wickets of Shikhar Dhawan and Rohit Sharma early in their innings after being put in the bat against England in their ICC World T20 2014 warm-up at the Shere Bangla National Stadium. Rohit was out for five as he tried to pull Jade Dernbach over square-leg and top edged it. And later Dhawan cut one straight to point. Later, Yuvraj Singh edged one to the wicket-keeper off Chris Jordan.

Meanwhile, Virat Kohli is batting and has started off quite well. He is the key for the Indians as he was sent in at No 3. In the previous game, he was sent lower down the order, but this is his chance to get going here. With him, he has Suresh Raina in the middle. In seven overs, India are 45 for three. 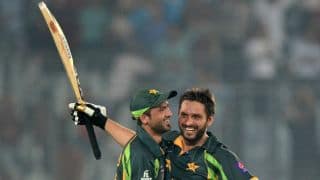