Amit Mishra admitted that the Test would have ended in India s favour had the host put up more pressure on England by picking wickets at the top.

Rajkot: Much was expected from the Indian spin trio of Ravichandran Ashwin, Amit Mishra and Ravindra Jadeja in the first Test of the five-match series against England. But the batting paradise at the Saurashtra Cricket Association (SCA) Stadium in Rajkot turned out to be difficult one for the bowlers with the match ending in a tense draw on Sunday. As many as six centuries were hit during the course of the game-four from England side and two from India, with hardly any telling bowling performance. Ace Indian leg-spinner Mishra, who toiled hard in the opening Test, has admitted that it was a difficult pitch to bowl. FULL CRICKET SCORECARD: India vs England, 2nd Test at Visakhapatnam

It was a good wicket for batting. It was a slow wicket. It would have been a lot more exciting had there been more pace in the wicket, Mishra was quoted as saying by BCCI.tv. He, however, admitted that the Test would have ended in India s favour had the host put up more pressure on England by picking wickets at the top. There is difficulty for the bowlers to bowl on wickets that are suitable for batting and you are about to bowl to a side that has already scored 500 plus. It is important as a bowler to bowl in the right areas and make the batsmen commit errors. We tried our best but credit to them for the way they batted, he said.

The leggie was playing a Test after a gap of three months having played last against West Indies in Jamaica. Going into the second Test which is to be played in Visakhapatnam, Mishra, who was the Man of the Series in the five-match ODI series, would be high on confidence because at this very venue, he picked up a fifer during the final game. Cook defends his decision to declare post lunch on Day 5

However, the 33-year-old has agreed that it did take some adjusting for the format shift after the telling performance against the Black Caps. I wouldn t say I bowled very well. It did take time for me to get my rhythm, especially since I was playing a Test after a long time. I was at the bench for two Tests in the West Indies and then sat out in the New Zealand Test series. Also, I was coming off from the ODI series so the transition from ODIs to Tests did take some time. Today, I believe there was improvement in my bowling in the second innings and I bowled better, he said.

The first innings didn t go my way but I began to get my rhythm in the second innings when the pitch began to help the spinners a bit. Hopefully, I can continue with this rhythm in the next Test match if I get a chance. I do have the confidence of the fifer I took against New Zealand in Vizag and my preparations will only get better come the second Test, he added. Kohli says his side at least know how to draw games now

Indian skipper Virat Kohli remained unbeaten in a tense final session to deny England victory in the opening. With a target of 310, the situation almost got out of hand as the home team lost six wickets in the process. Kohli and Ravindra Jadeja batted out the day with scores of 49 and 32 respectively and the match ended in a draw.

However, according to Mishra, the dressing room, which went a bit tense towards the end, was confident of the outcome. There was a bit of pressure but we were confident of the outcome. Our batsmen were in form and had runs under their belt. The batsmen to follow were also confident that they could bat it out. It was great batting from Kohli and Jadeja, who was very positive and he even went for shots, Mishra said.

At such a time, the bowlers tend to get on the back foot. That gets them thinking. He was asked to play his natural game but at the same time not try anything flashy. Both showed great temperament and showed we wouldn t succumb under pressure, he added. The leg-spinner, who ended with match figures of 158-3, insisted that the team would take confidence from the Rajkot Test.

We will take confidence from this Test and there were quite a few positives that we can take into the next Test. We replied well to their 500 plus score and we played positive cricket. We will try to do well in the next match, he said. The two sides will now lock horns in the second Test from November 17 in Visakhapatnam and it would be England, not the host, who would be high on confidence. 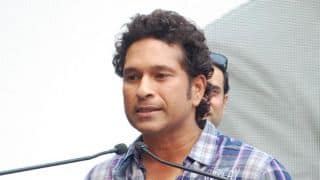