Rahul's first century had come against West Indies in 2016 when India lost the game by 1 runs chasing 245.

India have started their series with a win against England in the first T20I at Old Trafford, Manchester. India won the game by 8 wickets and 10 balls to spare. KL Rahul registered his second T20I century to guide India to win. He smashed 101 off 54 balls at a impressive strike rate of 187.04. His innings included 10 fours and 5 sixes. He was in sublime form in the Indian Premier League (IPL), had smashed 70 off 36 in the second T20I against Ireland (where he opened with Virat Kohli), and his form spilled over into Tuesday’s match.

Rahul came to bat at No. 3, after Shikhar Dhawan was dismissed in the first over. He did not waste time in getting his foot down, reaching his half-century in 27 deliveries. At the other end, Rohit Sharma found it hard to get the ball away, and was happy to rotate the strike. They stitched a partnership of 123 runs for the second wicket chasing 160.

Rahul’s first century had come against West Indies in 2016 when India lost the game by 1 run chasing 245. He is now the second Indian to have two tons to his name, after Rohit. Colin Munro is the only batsman with 3 tons in the shortest format of the game. 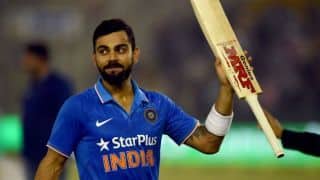