Catch Live Updates of Day two of the first Test between India and England here.

England 43/1 | Overs 17
Robson 20(48), Ballance 15(46)
The final over of the day! Ishant Sharma continues and a single is taken first up by Robson. Ballance then gets a brace through the leg-side. Off the last ball, there is an appeal for a caught behind down the leg-side, but in the replays it is seen that the ball just clipped the stumps. That is the end of day’s play. A good day for India. Though they collapsed, the last wicket partnership helped them push to 457. England then came out and lost the wicket of Cook. But the two youngsters have done well to take England through to stumps. Do join us tomorrow for Day Three. Until then, good bye!
England 40/1 | Overs 16
Robson 19(46), Ballance 13(42)
Ballance is batting well. When Ishant pitched one full outside the off-stump, he is driven very well for a four. But, later, there is an edge, which doesn’t carry to the wicketkeeper. Stuart Binny then comes on to bowl.
England 31/1 | Overs 11
Robson 16(37), Ballance 5(27)
Robson and Ballance are happy to defend it. Dhoni then gambles a touch as he gets in Ravindra Jadeja and Ishant Sharma. Jadeja is getting a little bit of turn here. Ishant has already bowled a maiden to Robson, keeping him on strike.

England 25/1 | Overs 9
Robson 15(28), Ballance 2(18)
Robson manages to get a boundary for himself as there is a misfield in the deep. Ishant Sharma then comes on to bowl.
England 17/1 | Overs 6
Robson 8(18), Ballance 2(9)
Ballance and Robson, the two young men have a responsibility on their hands. They have to guide England safely through to stumps. Robson has moved to eight and Ballance has also opened his account.

India have NEVER lost a Test after scoring 450 runs in the first innings of match. #EngvsInd

England 9/1 | Overs 3.4
Robson 4(11)
Cook is gone! He has been bowled round the legs. Shami bowls it on his pads and Cook moves across and it has knocked his leg-stump.
OUT! Cook 5(10)
England 1/0 | Overs 1
Cook 1(1), Robson 0(5)
Cook gets off the mark first ball as he gets bat onto a ball that moves into him from Bhuvneshwar. And then Robson plays five dots as Bhuvneshwar gets early movement.

India 457 | Overs 161
Shami 51(81)
These two have now recorded a partnership of 110. This is now the second highest partnership for India for the 10th wicket. And then Bhuvneshwar is out as he tries to go over the top and is caught at mid-wicket. A wicket at last for Ali.
OUT! Bhuvneshwar 58(149)

Who said Indian bowlers wouldn’t do well in England? 😉

India 448/9 | Overs 157
Bhuvneshwar 50(133), Shami 50(73)
Bhuvneshwar has got his first Test half century. This is now a 96-run stand. A very good knock this and it has helped India tremendously. And Shami goes through the line and smashes a six down the ground and that is his half-century. That is the 100-run partnership.
India 435/9 | Overs 155
Bhuvneshwar 46(119), Shami 41(68)
Mohammed Shami and Bhuvneshwar Kumar continue. Plunkett continues and he is coming from round the wicket. Shami plays for a couple through the off-side.
India 433/9 | Overs 153
Bhuvneshwar 46(119), Shami 39(62)
Bhuvneshwar and Shami are now building this partnership very well. They have put up 87 for this wicket and it is going very strong. Now, it is tea. Wonderful partnership here.
India 419/9 | Overs 147
Bhuvneshwar 40(97), Shami 31(49)
Shami cuts one behind point to get a boundary. The highest partnership for the last wicket is 133 by Zaheer Khan and Sachin Tendulkar. However, Tendulkar had only come at No 4.
India 404/9 | Overs 143
Bhuvneshwar 33(77), Shami 23(45)
Bhuvneshwar opens the face of the bat and places one from Stokes and that goes to the boundary. That is the 400 for India. This partnership has helped India.
India 397/9 | Overs 140
Bhuvneshwar 27(65), Shami 22(39)
The 50-run partnership is up with SHami smashing Ali down the ground for a four. This partnership has been inspirational. Remember last year? When Ashton Agar and Phil Hughes put up 163 runs for the last wicket.
India 389/9 | Overs 138
Bhuvneshwar 23(57), Shami 18(35)
Suddenly Shami is on the attack. He has played some very aggressive strokes and has moved into double figures. Even though there are quite a few men around the bat, he is still managing to find the gap. But, the shot that stands out is a four over extra cover by Bhuvneshwar.
India 370/9 | Overs 134
Bhuvneshwar 16(46), Shami 6(22)
Bhuvneshwar Kumar is farming the strike for himself and keeping it. SHami hasn’t faced too many and it is Bhuvneshwar who is keeping India afloat.
India 356/9 | Overs 129
Bhuvneshwar 8(27), Shami 1(10)
Shami and Bhuvneshwar are picking the runs that are available for them. They are just extending India’s fight here. It has been a tough time for the Indian batsman.

India 342/5 | Overs 117
Dhoni 80(146), Jadeja 24(18)
Anderson strays on Jadeja’s pads and he is guided for a four through fine-leg. A few singles and then come along as lunch is taken. India go into lunch at 342 for five. That is a good session for them. Dhoni is unbeaten on 80 and he will look to charge, Jadeja has come out all guns blazing. It promises to be an interesting session later in the day. Do join us.
India 327/5 | Overs 115
Dhoni 74(138), Jadeja 16(9)
Dhoni tries to keep strike at the end of Anderson’s over. He pushes to the off-side and runs. Had the throw hit the stumps it would have been out. But, it goes for overthrows. Dhoni gets five with that. When Moeen Ali comes for the next over, Jadeja smashes a half-volley straight down the ground and it has gone all the way for a six. And then Jadeja goes for it again and hits it over long-off for a six. Then there is an appeal for leg-before off the last ball, but it has hit the bat as Jadeja indicated.

India 309/5 | Overs 113
Dhoni 68(131), Jadeja 4(4)
Ravindra Jadeja is the new man in the middle. Ali continues as Dhoni hits the second ball down the ground for a single. Replays suggest that the ball hit Vijay too high and it may have been missing the stumps. Jadeja gets off the mark off his fourth ball as he pulls a short one from Ali over mid-wicket for a four. That was asking to be hit.

WICKET! Vijay has gone for 146 after being trapped lbw by Anderson. India 304-5. http://t.co/sW5FKa635h #EngvInd pic.twitter.com/EffhZHsNr4

India 304/5 | Overs 112
Vijay 146(355), Dhoni 67(129)
Vijay is out! A magnificent innings has come to an end. Almost against the run of play. Anderson got it to come in and hits him high on the back leg. But, it is given out. Magnificent knock by Vijay!
OUT! Vijay 146(361)
India 304/4 | Overs 111
Vijay 146(355), Dhoni 67(128)
After India get to 300, Vijay and Dhoni play out two maidens. It is on this wicket that they can dominate and perhaps they will start a charge in the afternoon session. It is important for India that these two continue through to lunch. Meanwhile, Moeen Ali is introduced for the first time in the day. Dhoni tries a reverse sweep and there was an appeal for leg-before. It hits his pads and they get a couple of leg-byes. Dhoni then places one past point and they get a couple.

India 300/4 | Overs 108
Vijay 146(349), Dhoni 65(117)
Dhoni smashes one four through the off-side. It was hit a little in the air but it is safe and goes for a four. The run-scoring rate is still slow and it needs to lift. However, they are adding solidity with this partnership. Vijay then flicks one from Plunkett for a four through mid-wicket. That brings up the 300 for India.
India 290/4 | Overs 105
Vijay 142(339), Dhoni 60(109)
Vijay now moves into the 140s with a glorious drive through the off-side. That has been played very gracefully. This game sees patches where the batsmen are slow and then there are a few runs. There will come a time when Vijay and Dhoni will start attacking.

Since the 2013-14 Ashes in Australia Matt Prior has taken 25 catches and dropped 11. That’s 11 dropped catches in 8 matches. #struggling

India 285/4 | Overs 101
Vijay 138(325), Dhoni 59(99)
Dhoni is now trying to be a little more aggressive. He walks down the track and hits one straight to mid-on. And then, he charges again, but is hit on the pads. That was hit outside the line. They get a leg-bye. Later, Dhoni gets a couple and that is the century partnership as there are overthrows. Dhoni then dances down the track to Stokes and hits him past mid-on for a four.
India 276/4 | Overs 99
Vijay 137(320), Dhoni 52(92)
AFter a very slow passage of play, where the batsmen played two maiden overs, Murali Vijay gets things going with a beautiful drive through square for a four. He then plays a similar shot and gets two.
India 270/4 | Overs 96
Vijay 131(308), Dhoni 52(86)
Vijay plays a maiden over from Anderson. Dhoni follow suite as well. But then Anderson overpitches in the 96th over and Vijay drives it beautifully for a four through mid-off.

CHANCE! Prior gets his fingertips to an edge from Dhoni but he can’t hold on! http://t.co/sW5FKa635h #EngvInd pic.twitter.com/zo5SjAEOuR

India 265/4 | Overs 93
Vijay 126(300), Dhoni 52(76)
Dhoni gets an edge off Broad and it is dropped as Prior just manages to get a hand to it. It was dying on him and he had to dive to his right. That took Prior’s gloves and went past the slips. They get a couple of runs.
India 263/4 | Overs 92
Vijay 126(300), Dhoni 50(70)
Dhoni plays out a maiden over first up. James Anderson starts from the other end. There is a short mid-on there. Remember, Cheteshwar Pujara had been caught there yesterday. The first runs for Vijay on the day. He opens the face of the bat and is sent through third-man for a four.

Murali Vijay scored his fourth Test ton and first in overseas conditions to take India to a commanding position of 259 for four at stumps on Day One of the first Test at Trent Bridge on Wednesday. On an easy batting wicket, Vijay stuck to the task and shepherded the Indian innings after a brisk start. Skipper MS Dhoni‘s unbeaten 50 towards the end gave the visitors much needed momentum. Dhoni and Vijay shared an unbeaten stand of 81. England bowlers did have a brief spell where they snared quick wickets to put India in a spot of bother.

India couldn’t have asked for a better start to their tour. At venue known to present green tops, the visitors were welcomed to dry grass which offered a subcontinent-like condition to bat. Hi, This is Nishad Pai Vaidya and I will be bringing you the updates of the day’s play. 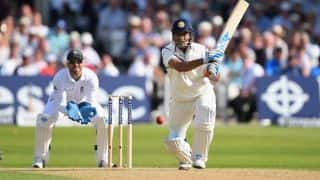 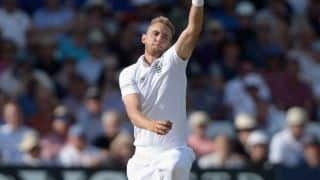