Catch Live Updates of the fourth day's play of the third Test between India and England here.

India 112/4 | Overs 42
A Rahane 18(40), R Sharma 6(25)
England continue to dominate. Anderson though provides India a chance as he drops a caught and bowled off Rohit Sharma. A similar one to the drop like in The Ashes 2010-11 when Anderson spilled a caught and bowled chance off Michael Hussey at Adelaide. Five wickets down would have been bad news for India. India end the day on 112 for four. There is some altercation between Anderson and Rahane right at the end of the day.

A needless run out, two batsmen dismissed after getting a good start suggests anxiety & lack of focus. Not a confident team one-up in series

India 89/4 | Overs 32.2
A Rahane 2 (12)
Certainly not what the Indian fans would like to see, and definitely not what the Indian batting stars as well. Indians ARE struggling against England’s part-time-yet-effective spinners. Moeen Ali continues to make breakthroughs, this time it is Virat Kohli who is caught behind. Another start wasted. England on their way to a big win at the moment.
OUT! V Kohli c Buttler b Ali 28 (56)
India 80/3 | Overs 29
V Kohli 21 (48)
BIG WICKET! Shikhar Dhawan is removed by Joe Root, who gets a crucial breakthrough for his side. Jordan takes another catch after the ball took outside edge as Dhawan came forward to play the off-spinner. India in deep trouble!
OUT! S Dhawan c Jordan b Root 37 (85)
India 73/2 | Overs 26
S Dhawan 34 (77), V Kohli 17 (38)
Both Dhawan and Kohli are batting cautiosly at the moment. Since the wicket is still very good for batting, these two should not face many troubles ones settling themselves in.
India 54/2 | Overs 21
S Dhawan 25(58), V Kohli 8(27)
Dhawan and Kohli have decided to play for a draw it would seem. It was unlikely they would have been gunning for 445 anyway though. Moeen and Woakes being dealt with quite easily by the pair.
India 33/2 | Overs 13
S Dhawan 11 (33), V Kohli 4(4)
Oh dear! Cheteshwar Pujara falls to England spinner Moeen Ali. The batsman gets an outside edge and Chris Jordan makes his mark in the game for the first time in four days with a sharp catch. India in big trouble with quick wickets.
OUT! C Pujara c Jordan b Ali 2 (6)
India 26/1 | Overs 11.1
S Dhawan 10 (32)
Murali Vijay is OUT! Shikhar Dhawan calls for a sharp single, but Stuart Borad, fielding near the umpire near the leg side runs out India’s most successful opener.
OUT! M Vijay run out 12 (35)

Apart from James Anderson and Stuart Broad, no England pacer could create problems for India on this wicket. Change in the bowling attack, Chris Woakes comes in.

India 24/0 | Overs 10
M Vijay 11 (31), S Dhawan 9 (29)
Indian openers have negotiated the England bowlers quite well so far in the day. The pitch is still very good for batting and there should be no problems for those who apply themselves and not play reckless strokes. Big test for Shikhar Dhawan, and he has looked determined so far to turn around things.
India 14/0 | Overs 5
M Vijay 2 (15), S Dhawan 7 (15)
India have begun on a positive note. Shikhar Dhawan is looking slightly low on confidence as he is continuously troubled by the England pacers outside the off-stump.

Tea has been taken at Southampton with England setting 445-run target. Read the tea report here.

If England cant bowl them out in 132 overs, they dont deserve to win. Cant argue with this position… #engvind #thebigtest

Pankaj Singh has now conceded most runs on Test debut without a wicket.

England have been in command right from the word go in this Test match. India were expected to spend lot of time on the wicket today, but James Anderson bounced out MS Dhoni and Mohammed Shami to give 239-run lead. England opened with Alastair Cook and Sam Robson, and the dismissal of the latter played in England’s advantage. Gary Ballance’s quickfire 38 helped England get some much-needed quick runs. England win yet another session, have extended the lead by 319 runs. It’s lunchtime at Southampton on Day 4, click here to read Shiamak Unwalla’s lunch report here

England 80/2 | Overs 20.4
A Cook 29 (57),
Ravindra Jadeja removes Gary Ballance after changing the bowling end. The ball was pitched outside the off-stump, and hit Ballance on the pad very close to the gloves. Cheteshwar Pujara takes an easy catch at short-leg. Umpire Marais Erasmus thinks that is out. TV replays suggest it wasn’t.
OUT! G Ballance c Pujara b Jadeja 38 (48)
England 53/1 | Overs 14
A Cook 23 (40), G Ballance 17 (24)
Alastair Cook and Gary Ballance have started scoring runs freely on this batting-friendly wicket. England have raised their 50 in no time, as they had trudged along to 28 after 11 overs. Lead extended to 292 runs.
England 28/1 | Overs 11
A Cook 12 (30), G Ballance 3 (16)
England have extended their second innings lead to 267 runs. Gary Ballance, who scored a superb century in the first innings has joined his captain in the middle. England are not really looking to score quick runs at the moment.
England 22/1 | Overs 6.4
A Cook 9 (20),
Bhuvneshwar Kumar provides India the first breakthrough as he gets rid of Sam Robson. The bowler puts one in the channel outside off, an area where Robson continues to struggle. England’s lead is past 250 at the moment.
OUT! S Robson c Dhawan b Bhuvneshwar 13 (20)
England 14/0 | Overs 4
A Cook 7 (16), S Robson 7 (8)
England have begun in their second innings on a positive note. Indians are giving them little bit of width here and there, which the openers are cashing on at the moment. Lead extended to 253 runs now.

England have decided not to enforce the follow-on. Here’s Alastair Cook and Sam Robson again. Should Jos Buttler have been promoted to give England some much-needed quick runs?

Stuart Broad took wickets at either end of a long, hot day while Moeen Ali turned the focus back on to his cricket as England strengthened their grip on the third Test against India in Southampton. At the close of Tuesday’s third day, India were 323 for eight in reply to England’s imposing first innings 569 for seven declared, a deficit of 246 runs and still needing a further 47 to avoid the follow-on.

India captain Mahendra Singh Dhoni was 50 not out and Mohammed Shami four not out. Broad, who had looked tired for much of this series while struggling with a knee injury, appeared to have regained his old zest while taking three for 65 in 23 overs. Meanwhile James Anderson, England’s other senior pace bowler, who had taken a wicket late on Monday, finished Tuesday with three for 52 in 24. Hi I am Devarchit Varma  and I am going to be bringing you live updates of the fourth day’s play at Southampton. 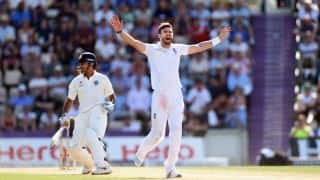 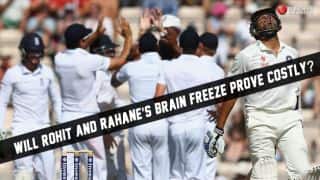