Catch the live update of Day Two of fourth Test between India and England here.

(After a poor Day One of the fourth Test at Old Trafford, will India bounce back on the second day? Catch live cricket scores and live updates of the match here.)

Catch the live blog for Day Three of the fourth Test here.

Well this is disappointing. After an excellent day’s cricket, rain has played spoilsport on Day Two. England firmly ahead in the game, but India not quite out of it yet. You can read Abhijit Banare’s Day report here.

.@ECB_Cricket finishes Day Two of the Second Test 237/6 against @BCCI as rain curtails an even day’s play #EngvInd pic.twitter.com/384Z9tEGf9

It’s bright and sunny at Old Trafford and the covers are coming off. At least for now. #EngvInd pic.twitter.com/BUEfHtR4h2

With that many ducks, it’s certainly not surprising that there is so much water at #OldTrafford. #IndvEng

Once Pankaj was about to bowl to Chris Martin for his maiden wicket. Umpire called off play due to bad light. #YoPankajSoUnlucky

old trafford as it is now. locals confident of play! pic.twitter.com/2Jj8iHBnfj

The covers are on. Our radar suggests it could just be a passing shower pic.twitter.com/4MgfSHN5zR

England 237/6 | Overs 71
J Root 48(94), J Buttler 22(53)
Jadeja again. Oh poor ball, short and cut away by Root, who is now into the 40s. Six runs off that over, and Jadeja is clearly not proving effective. A change is likely soon. Aaron comes in, he will be looking to bowl another quick spell. Good over by Aaron, just a single off the over. Not quite express pace though. And Jadeja again. The lead is worth over 80 now. Another single off that one. But with the clouds hanging around, it might be more prudent for Bhuvneshwar to come on. And now it is drizzling as well. Aaron again. Pankaj has fielded well, but Virat allows it to go for an overthrow. Yes, you read that right. Oooh, Aaron bowls one short and Buttler takes it on the shoulder. Didn’t mean to though, unlike Dhoni yesterday. Ooh good ball to end the over, it really zipped through. The rain is threatening to come down heavily now, so the umpires have decided to call off play for a bit. England lead by 85, and India might not be too disappointed about the break.
England 226/6 | Overs 67
J Root 39(78), J Buttler 21(45)
We are back for the post-lunch session now. Pankaj Singh, the man with the golden arm (!), to start proceedings. And he bowls one wide down the leg side. Root is the man on strike. Oooh that one swung away from Root, beat him that time. And another appeal, and turned down again. Even Pankaj laughs it off though. Good over to begin with. Jadeja comes on now. Expensive over, eight runs off that one. Aaron ran in to field the ball, it went between his legs, and the batsmen ran four. Pankaj again. Oh lovely shot from Buttler! Slightly short, and very well played through covers. Jadeja again. Just a couple of that one. Pankaj again. Root and Buttler have batted well after Lunch. Oh outside edge AGAIN from Pankaj. Drops short of Dhoni, and it’s four more. Poor, poor Pankaj. And now he bowls a short one that has been called wide. Oh short and wide this time, Root cuts this ferociously! Four to end the over.

England 201/6 | Overs 62
J Root 23(60), J Buttler 13(33)
So Jadeja and Ashwin bowling in tandem now. Not much spin on offer, but the bounce is keeping the spinners interested. Occasional runs here and there, but for the most part the pressure being maintained by India. This will be the final over before lunch now, Jadeja to bowl. And just a single off it. So India have won their first session in a very, very, VERY long time. Bhuvi and Aaron were probing in the morning session, but England also made steady progress. The match beautifully set up right now. England lead by 49, but India by no means out of it yet.
England 192/6 | Overs 58
J Root 20(50), J Buttler 7(19)
Ashwin again. After an expensive first over, he’s really settled in well. Just two off that one. Bhuvneshwar again. He is a real workhorse, a serious asset for India. Oh glorious shot! Short from Bhuvi, and he cuts this one beautifully. Ashwin comes back on now. Buttler looking quite secure in the middle. India will perhaps not mind him taking a few risks though. Bhuvi again. Just a couple of runs there. And now it’s Jadeja! A round of “boos” from the spectators. Jadeja bowls a tight line to start off.
England 178/6 | Overs 53
J Root 11(36), J Buttler 1(5)
Aaron again. Just a couple of runs off that one. Here is Ashwin, coming on to replace Bhuvi. He could prove to be a handful on this pitch. Oh Moeen looking to go for a bit of a slog, misses it entirely. Moeen showing more respect there. This is a good spell for India here, not too many runs being scored. Aaron comes on again. OH HE’S GOT HIM! Aaron castles Moeen with a very good delivery. Full, fast and swinging in, Moeen had no answer for that. In walks Jos Buttler. Aaron seems to have a bit of a problem with the no balls though. Again, bowls two in a row. Aaron is really putting in the yards, but it won’t help anyone if he takes a wicket off a no ball. England lead by just 22 at the moment. Oh dear, that was another short, quick ball, but it’s a bit too short and fast for Dhoni. That’s gone for four byes.
OUT! M Ali 10(13) b Aaron
England 160/5 | Overs 48
J Root 9(21), M Ali 10(13)
Aaron again. And Root off the mark with a boundary to third man. Aaron follows up well though. Nippy and up to the stumps. Just four off that one. Bhuvi continues. Just one off the over there. Aaron continues. And just three off that over now. Decent over, could be more probing. And now it’s time for drinks. Good progress made by India so far on Day 2. Bhuvi again. Oooh good ball, some swing in to Root, but very well played. Three to Root. Bhuvi looks like he’s going to take a wicket any time. The scores are level with that triple as well. Short ball to Moeen, he pulls all along the ground and gets four. Nicely played by Moeen, but I don’t think India will mind this too much. Another short ball, another pull, another boundary. Moeen not afraid to take the short ball on.

Edged and taken. Root was rooted to the crease #EngvsInd

England 140/5 | Overs 42
J Root 0(7), M Ali 0(1)
On comes Aaron now. Oh what a shot! Ian Bell plays a beautiful drive for three. Good start from Aaron. Oooh Bell leaves one, but it was really close to the stumps. Hello, what has Aaron done here? Last ball of the over, the batsman defends back to him, and he throws the ball to Kohli at leg slip for some reason. I think he might have wanted to find Dhoni though. Anyway, here’s Bhuvi again. He has bowled well this morning, needs to move the ball a bit more though. OH AND HE DOES! That’s the colossal wicket of Ian Bell! Beautiful delivery, pitched up and takes the outside edge to Dhoni. Bhuvi takes his third. Moeen Ali comes in. Good ball to start off to him.
OUT! I Bell 58(82) c Dhoni b Bhuvneshwar

Crucial wicket for India. Chris Jordan is no mug with the bat. #EngvsInd

England 137/4 | Overs 42
I Bell 55(77), J Root 0(2)
Pankaj again. Oh there’s some swing there, and an inside edge fetches Jordan four more! Pankaj’s agony continues. And now four off the outside edges down third man. One really feels for him. Bhuvi now. Again bowls a tight line, but not much movement by the looks of it. It’s a maiden over though, another good but untesting one. Pankaj again. There is a bit of swing on offer, but at Pankaj’s pace it is hardly threatening. Jordan playing him with relative ease. Here’s Bhuvneshwar again. OH HE’S GOT HIS MAN! Bhuvneshwar bowls a slowish shorter ball, Jordan looks to duck and ends up pulling to Varun Aaron at short midwicket. Very awkward shot, but a breakthrough for India. Pankaj will be wondering why he couldn’t have got that lucky! Oh good ball first up to Root. Ooh that short ball really took off. That’s a wide ball.
OUT! C Jordan 13(22) c Aaron b Bhuvneshwar
England 125/3 | Overs 38
I Bell 52(69), C Jordan 5(8)
Welcome back! It’s Bhuvneshwar Kumar to start proceedings. Ian Bell on strike. Five good, tight balls to start off with, and a boundary down third man. Story of the match so far. And here is Pankaj Singh. “Can he take a wicket today?” says Sanjay Manjrekar, and the rest of the six billion people on the planet. Starts off nicely, but bowls one short and Jordan smashes that away through midwicket for four. Ian Bell gets to his fifty as well in the over. That’s his 42nd in Tests. Good knock from him. Bhuvi back on now. Couple of runs for Bell, clipped off his pads.

Hello and welcome to CricketCountry’s live blog of Day Two of the fourth Test between India and England at Old Trafford, Manchester. I am Shiamak Unwalla, and I will be bringing the live updates to you. A brilliant bowling performance by England pacer Stuart Broad has put the visitors in a commanding position on the first day of the fourth Test against India at Old Trafford on Thursday. Broad’s six-wicket haul helped the hosts bowl out India for a mere 152 and then end the day at 113 for the loss of three wickets, trailing by 39 runs at stumps. Read Day One’s final report here.

The six foot five inch tall Broad wrecked the Indian batting order from top to bottom from clinching the first wicket of Gautam Gambhir (4) to the last — Pankaj Singh (0). He starred by picking up six wickets for only 25 runs in 13.4 overs with six maidens and a staggering average of 1.82, aiding bundle out India at tea.

It was a miserable performance by India as six batsmen failed to open their accounts. The only saving grace was skipper MS Dhoni’s rearguard 71 and Ravichandran Ashwin’s fighting 40. The only other Indian batsman to get to double figures was Ajinkya Rahane (24).

England pacers made the best use of overcast conditions after Dhoni opted to bat. Though the pitch was good for batting, the conditions assisted English seamers, who got the ball to swing right from the start. Opening bowler James Anderson also picked up three wickets for 46 runs. 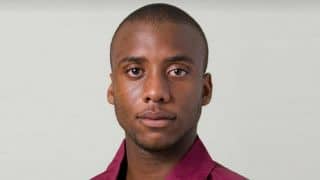 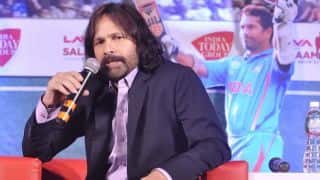 Sachin Tendulkar thanks friends for support after his brother's surgery