England U19 won by 3 wkts
Man of the Match: Ben Duckett

(A confident Indian side will take on England who just about made it to the knockout phase. On slow tracks at Dubai, it’s game on between the Indians dominated by spinners and a talented England side.)

A thrilling match won by England. This is the second time England have gone through to the semi-finals of the ICC Under-19 World Cup. Kuldeep Yadav was brilliant spinning his web around the batsmen, but kudos to Ben Duckett for shepherding the team through the middle overs. Yadav pulled India back in the game towards the end, but England held on their nerves and sealed a three-wicket win. Read the Match Report here. Meanwhile Pakistan have defeated Sri Lanka in the other quarterfinal and progressed to the last four.

India have won the toss and elected to bat. Play set to commence at 11:30 am IST, (10 am local time). Ricky Bhui is back in the team in place of Shreyas Iyer.

The latest update from Dubai is that the match has been delayed due to dense fog. If play doesn’t commence at 10 am local time, the number of overs will be reduced. But conditions have cleared up now. The fog is not as thick as it was an hour ago. The toss will be taken shortly. Meanwhile the rest of three matches too have been delayed due to the fog.

Hello and welcome to the live coverage of the first of the ICC Under-19 World Cup quarterfinal between India and England at Dubai. I am Abhijit Banare and I will be bringing you the live updates of the match. While Indians cruised through in their league phase, the England side just about managed it with a win against New Zealand in a virtual knockout game. India look like a well-oiled team with the spinners being the most impressive on the slow wickets. India’s spin department is well set with all-rounder Deepak Hooda rolling his arm over with his off-spinners. Kuldeep Yadav is the main weapon as his left-arm chinamen have troubled the batsmen.

This is a good match-up and after two encounters against the minnows, India face a tough opponent. England have come back the harder way and it is interesting to see who would hold their nerve in this crucial encounter. India may be favourites, but don’t count England out. 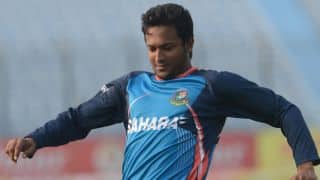